0
0
It’s a special night–the tail end of my residency at Madrono Ranch and the beginning of another artist’s stay. The ranch owners are in town from Austin and have offered to host us for a feast of pan-roasted stewed tomatoes, black beans with bacon, rice, and bison steaks the size of Jay Leno’s face. Of course, we start with the Maker’s Mark and Damn, I think after my first sip, it’s good to have some company.

“One of the bison has a small gash on its side,” I say after we’ve all made introductions. “Did you notice?”
“Yes Ma’m,” R says. He’s the ranch manager. He basically knows everything and what he doesn’t know he’ll try anyway and he’ll likely get it right. “That’s mating for you.” 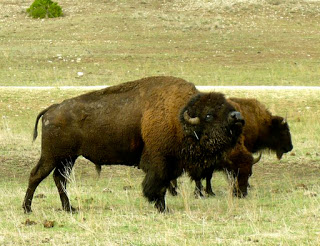 I pause, then look out the window again at the herd. “Yeah, I guess so.”
I haven’t eaten a full steak of anything since 7th grade. I still lived in Oregon then, my extended family on the East Coast. One summer, I flew across the country by myself and traveled up and down the coastline via Amtrak. This included one week in New York City with Great Aunt Betty and Uncle Al. They didn’t have much but they both agreed that my first time in The Big Apple meant I ought to eat my first-ever NY steak, too. The food came to our candle-lit patio supper just a few blocks from their rent-controlled Manhattan apartment. I ate as much as I could (I remember the chewing, mostly–how noticeably long it took). Aunt Betty and Uncle Al smiled wider with each bite I took. “No more Ms. Whimpy,” Uncle Al said, slugging me in the arm with a gentle punch. “That’ll toughen you up.” He was kidding, of course. Even then he somehow knew I’d grow up strong–NY steak or not.
But here at the ranch it’s not about being tough or not, it’s about eating locally and sustainably and with good company. I watch and listen and learn. Even though we’re eating in one of the fanciest places I’ve ever seen, it’s expected that a good eater will get in there and suck the meat off right down to the bone–elbows pardoned. And even though it’s still good to eat your greens in Texas, the salad comes last–after the meat, after the grain, after the fatted beans.
When it’s all said and done I’m ready to walk the half mile back to the lake house down the starlit, caliche road but the ranch owners insist, shaking their heads. “It’s not a good idea, not tonight,” they say. The clouds are out and I don’t have a flashlight but I’m pretty practiced at old gravel roads in the dark. We step outside and feel the air–cool for the first time in months–and they shake their heads again. “There aren’t good things out there,” they warn, kindly. I take a ride from the other artist in resident and in just half a mile we encounter six wild boars nosing around the perimeter of the road–or feral pigs, as folks seem to call them when they have that sort of hybrid appearance. Not critters I needed to run into in the dark in the middle of the night. I’m glad for the ride. And the steak. And the residency. Madrono has been good to me.
Cowboy Fact of the Day: The heyday of the long drive was from the Civil War to the mid-1880’s. During that time, more than 10 million cows were driven from Texas (many of them on The Western Trail) to points north. (William H. Forbis)