0
0
We’re standing outside in direct sunlight on this 100-degree day and I’m the only one who seems to be sweating. There’s R the ranch manager, myself, and a soil conservationist. They’re both wearing jeans, hats, and boots. I’m in a tank top and gym shorts. They seem comfortable, almost at ease. Meanwhile, sweat drips down the backs of my legs, sunlight pesters my shoulders, and my tongue starts to shrivel in my mouth. When I tell the soil conservationist I grew up in Oregon, he squints a little, then smiles: “You must be flakin’ off here in Texas, then!” He’s right, but no matter. I’m psyched for today because I get to tag along on a driving tour of Madrono Ranch, which means a ride in R’s 4×4 rig up the side of the Texas Hills. And when he says up, he means it: 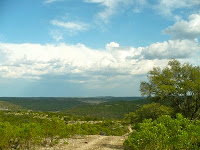 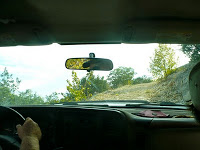 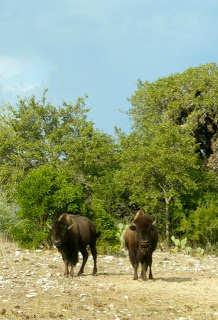 Along the way I learn all kinds of things. The gravel roads here are white because they’re a limestone/granite blend called caliche. The ranch is over 1500 acres and the buffalo herd is at 43 this year (including 8 calves). The next “harvest date” for two of the adult “buffies,” as they’re sometimes called, is October 24th. When I ask R if he likes to call them bison, buffalo, or buffies, he responds: “Sometimes I call them sons ‘a bitches, depending on what they’re doing. You have to treat them like a wild animal because they can and will turn on you at any instant. One thing I have learned,” he leans in, “is that if you ever see their tails curl up into a question mark, you’re in for it. It’s bad. It’s real bad.”
I ask about the shooting and R tells me it takes one shot between the ears/horns or right between the eyes. “The herd always knows something’s up,” he says, “So I have to really focus and I’ve got the meat inspector standing right there handing me the bullets.” Of course, the meat harvested at Madrono is raised and fed locally, slaughtered and butchered locally, then sold locally in organic food markets in and around Austin. 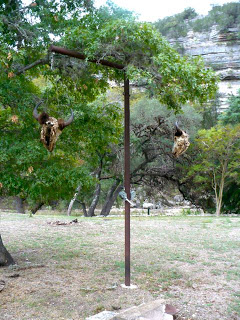 As for the deer I’ve been seeing, only the white-tailed deer are native. The fallow, sikia, axis, and aoudad (spelling?) are all “exotic” and, according to R, ” They’re like dogs. You drive down the road and they’ll follow your truck.” And the prickly pear cactus I’ve been seeing with “white speckles” are actually infested with bugs (called cochineal?). If you squish one of the speckles between thumb and forefinger, the white suddenly turns to blood-red liquid that was used back in the day by Comanches for war paint. 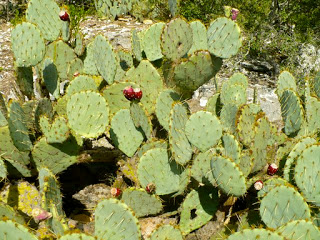 When it comes to the other plants, a little help from author John Graves (who, as far as I can tell, must have been the Aldo Leopold of Texas Hill Country) will put things in perspective. The grasses alone are too many to count: curly top, little blue stem, sprangletop, switchgrass, buffalo grass…I’ll let Graves offer this concluding assessment from TEXAS HEARTLAND: A Hill Country Year:

“[A] lush, diverse mat covered all but the steepest, rockiest hills and protected the soil it had built over ages, dotted with live oaks here and there, a savanna. But an excess of cattle ate it down and destroyed it, and the soil lay exposed to erosion, and what ages had built a few decades sufficed to undo. The original tall grasses show up [in Texas Hill Country] now only in occasional clumps and patches, and on the hillsides lie rough pieces of chunk rock, once partly or wholly buried beneath rich earth whose organisms slowly ate on them…

“…I suppose it would be easy enough to wax prim about this, in our hindsight aftertime. But the pattern that predestined the Hill Country’s exhaustion was an ancient one, not just American but human. Virgin land has intoxicated herders and farmers since whenever such activities began, and has seduced them into believing its lushness would last forever, and they have used it hard. Even in easily despoiled parts of the world like these hills, the land’s decline under such treatment, though rapid in geological or merely historical terms, has usually been gradual enough that men could lull themselves into not seeing it until too late. And if indeed they saw it, they were themselves often stuck in the pattern too–through habit, through the disappearance of frontiers. Hence the bared hills of Texas and Lebanon and Greece, and the starkness of much once-fertile Spain and of those Balkans that were the Romans’ granary, and the lateritic desolation of cleared tropical rainforest lands, and the sad decline of practically all vulnerable parts of the whole poor bloody old earth, whose virginity no longer exists simply because one of its millions of biological experiments developed a conquering brain, and hands.”

Cowboy Fact of the Day: The second most common cause of death for cowboys was pneumonia.