0
0
It’s difficult to describe my affinity for dawn in the Texas Hill Country. Already this precious two hours of mornings on Madrono Ranch feel like ritual. The lakeside pasture which, just twelve hours before, teemed with heat and thirst that kills, becomes a cool, settled, haven for life. Madrono aligns east to west in a canyon of hills, dawn stretching several hours as sunlight slowly spreads its fingers over crumbling hills, across limestone cliffs, around the edges of Spanish oak leaves, through the pastures of mesquite grass, and across the slick, reflective surface of the lake.

I am always struck by the air temperature first–my body almost called to remember a cooler place, a different time, another lifestyle. But the sensation fades quickly and I notice the scent of water next. There is nothing like it–that earth, soggy smell of freshwater in a landscape stricken by drought. Though this lake is small by most standards, it is no doubt an oasis here amongst the thirsting hills. Only one morning (after a late-night storm) have I encountered dew and even then, its presence was momentary. I caught a ride one afternoon to the source of this water, crumbling over limestone gravel to the top of one of the hills where this spring feeds most of Madrono: 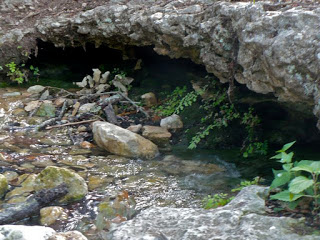 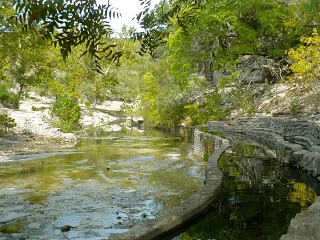 What I can’t capture in photograph is the way the morning light strikes the limestone cliffs along the far walls of the lake. These cliffs are a canvas for dawn and the show is never quite the same from day-to-day. One thing is certain: by the time the light strikes the far cliff wall, yellow warmth curling around my shoulders, it’s time for this Pacific Northwesterner to head back inside before the Hill Country starts bubbling over.

At the desk, a new character waits for my attention. What slow words will find their way to the page today? What movements will he make, what desires does he have, what quiet suffering? The possibilities seem as endless as the sunlight in Texas and with that, I get to work for the day.

Cowboy Fact of the Day: In 1845 there were more than 300,000 unclaimed cattle running loose in Texas. One cow drinks as much as 30 gallons of water per day and can walk up to ten miles without water.