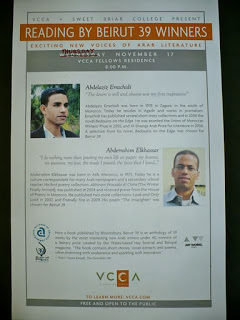 “Yalla, yalla!” These two words in Arabic have traveled with me from residency to residency and state to state, for twenty-three months. In English, this translates to “Let’s go!” and it’s written on a long piece of paper tacked to my wall next to many other long pieces of paper that contain all my notes on Afghanistan and Iraq. Until recently, those words in my notes didn’t mean anything to anyone but me and the characters in my stories.

But yesterday afternoon, Rahim and Aziz (the two writers from Morocco) came to my studio to look at my notes. They lit up when they saw those two words–yalla, yalla–in their own language, so many miles from home, in this little writer’s studio in a small town in Virginia. I told them I also knew inshallah (God willing) and shukran (thank you), but that was all. They taught me “hello” (which I’ve already forgotten) and goodbye (salaam, or peace…much like the greeting, asalaam alaikum). Between our afternoon visit, and their public reading and banquet a few nights ago (which involved translations from Arabic into French into English and back), life at VCCA these past few days has felt delightfully international. I’m soaking up every minute of it.

Rahim’s latest book of poetry is titled “Friendly Fire,” and refers to the personal wars we wage on ourselves. Although both he and Aziz speak French and English, their primary language is Arabic (and even some Berber). Between my extraordinarily rudimentary French, Aziz’s English, and Rahim’s growing English, we’re able to carry on a conversation well enough. It was interesting talking about “friendly fire” across cultures, and seeing how it shows up in Rahim’s contemporary poetry and my thematic fiction.

I also showed Rahim and Aziz my submissions logbook and talked about sending work to literary magazines and they described the same process in their own country. I gave them copies of my little zine of war flash fictions and they signed their Beirut 39 anthology to me. “Katey, it’s a great moments with you,” Rahim wrote. “Good feeling.” And Aziz signed “Kind and friendly Katey, happy to know you and see you in U.S.A.” Rahim and Aziz are true gentlemen; delightful, talented, and good-spirited pals. I’m grateful for the little glimpses of this vast globe that their presence affords. 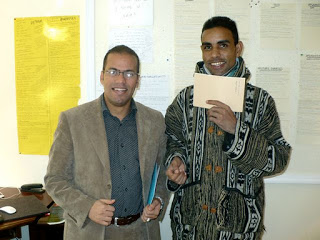