Back at the Dojo

0
0
The other part of coming home is training full time in Okinawan Shuri Ryu Karate and Shintoyoshinkai Jiu Jitsu. I haven’t written about my passion for martial arts in quite some time, so bear with me as I do a brief recap. I blogged about the first karate class I ever took in my life here, back in 2007. For two solid years, I trained as hard as I knew how, spending 10 hours a week in the dojo at my peak (and training for hours on “off” days on my own). My teacher Hanshi’s style is motivational, unforgettable, insightful, and inspiring. In 2009 I trained for and passed my White Pine Tree Test, and shortly thereafter my purple belt test. Just weeks before I hit the road in 2010 to start the three-year residency tour, I tested for Sankyu – first degree brown belt – which proved to be more of a psychological challenge than a physical one. 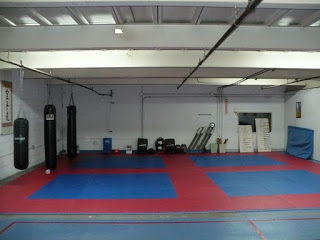 When I hit the road, the hardest thing to leave was my dojo. But I vowed not to be one of those students who gives up training. I joined alternative dojos in cities that I traveled to, trying different styles and reporting back to Hanshi by mailing him my training log and calling him once a month.

The brown belt has three different levels in Shuri Ryu Karate because it is considered the “seasoning” of the karateka before he or she advances and matures to black belt level. Several months after Sankyu, I flew from Michigan to Georgia, earning a promotion to Nikyu, the 2nd brown belt rank. Ten months after that, on a broken foot that I didn’t know was broken at the time, I attended a conference in South Carolina. The next week I was still limping and didn’t know why, but that didn’t stop me from leaping into the air when Hanshi called to say I’d been promoted to Ikkyu, the final level of brown belt. Typically, promotions are accompanied by tests, but because I mailed Hanshi my training logs, conferenced with him on the phone, and traveled to improve my training (he was always teaching at the conferences I attended), Hanshi considered these my tests and watched me closely each time our paths crossed.

Then, the broken foot for most of 2011. It was shocking. Horrible. Utterly devastating to my training and my writing process. My recovery took 12 months, including one “scare” this August that had me back in a mini-cast temporarily. But throughout that year of re-couperation and re-training, I still sent
Hanshi my training logs–some notes detailing doing exercises on my back
while I was in cast–and stayed in touch via phone. I gained weight and lost weight, and am now more muscular than I have ever been in my life, with one of my all-time lowest weights as a curvy, athletic adult.
In the meantime, Hanshi and his wife moved to Florida and Sensei Nate, his senior student in North Carolina, took over the classes. Participation went from small to smaller, but those still dedicated are training now and tonight I got my first glimpse of them during our two-hour class. It’s at once scary and invigorating being back on the mat. But the instant rapport between karateka is priceless: Where else can you toss each other around, work joint locks, throw punches, work kata, and laugh all at once? Sensei Nate and I stayed late into the evening, sparring and gabbing about old moves I was trying to remember. I have so incredibly far to go and I only have one month to do what I can, but I’ll take it. Slow and steady, I’ll take it…