The Writing Studio: The First Hemlock

0
1
Taking the first tree didn’t quite feel like cutting an artery, like I thought it might. It was a hemlock, after all, and a hemlock in the Blue Ridge sadly also means a woolly adelgid infestation. This pest is single-handedly responsible for major devastation to hemlocks in what seems like record time. When I moved here Fall 2002, I backpacked up to Deep Gap to a “designated camping site” in the National Forest only to find that so many hemlocks had been felled by the blight there was hardly a clear place to pitch a small tent. A few years later on a day hike the same site looked worse, with downed trunks blocking the trail. 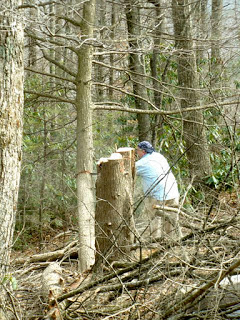 The hemlock Dad cut down a few days ago was alive and well in 2004 and in pretty good shape in 2006, with three strong, sister trunks shooting up into the sky. But by 2011, the hemlock stood dead upright–pale brown bark, brittle branches, not a trace of green in sight. The cutting went pretty smoothly, considering that the trunk was canted heavily toward the northward (downhill) slope of the land. Dad cut the first two sister trunks without incident. The third snagged, so Dad made a second cut, but it snagged again. With some jerking and twisting of major branches, though, within a few minutes the final top third of the tree came crashing down.
The air was filled with the scent of gasoline from the chainsaw, but as I approached the downed trunks and tangled branches, I was struck by the scent of life. Fresh, sharp, evergreen-laced air filled my nostrils and the tree, for a moment, seemed alive and healthy again. I said a private thanks to the tree, the patch of land, and these great mountains that let us cut and haul and build right over their skin.
With his part of the job done, Dad headed back to the house and I hauled branches and started a new brush pile. I loved the way the twigs snapped beneath my grip, reminding me of the backcountry survival techniques I studied as a teenager (which explain that the lowest branches on hemlock trees–healthy or otherwise–are always dead and dry, making perfect kindling even in a rainstorm because they are tucked beneath all the other branches and shielded from moisture).
We’ve had two days of rain and now snow and 50 mph gusts of wind…but later in the week looks like chainsaw-safe weather and we’ll either buck up the hemlock or fell the second tree. Meantime, we’re researching whether to set the writing studio on wooden or concrete piers.