0
1
Don’t try to do the math on this one, but if you want to get a sense for just how many inlets and bays there are in Southeast Alaska, consider this: the panhandle of Southeast Alaska is only 250 miles long, but has over 11,000 miles of shoreline–that’s more than the shorelines of the continental United States! What this looks like on land is that you can be standing on the shores of Baranof Island and looking across a very large (or small, for that matter) bay and see another island. “What island is that?” you might ask. The answer, of course, is that it’s the same island you’re standing on…it just winds and cuts and folds and bends into and out of itself over and over again until even best mariners get a little dizzy from attempting to orient.
Like trying to imagine 40 tons of herring, I also struggle to imagine large statistics like that, until I can see and feel a place for myself. Some
numbers and theories of geological and ecological history are just too
darn unfathombale for my conceptual brain to really get. But
other people get it, and having read a few summaries about the area I
thought I’d try to paraphrase some of what I have learned. Ready for more? Here’s another one that gives a sense for just how drastically the landscape here was formed:
About 20,000 years ago, the entirely of Southeast Alaska was buried under more then 2,000 feet of ice. But today, there are places in downtown Juneau that sit 400 feet above high tide. Likewise, there are bays that were walls of glaciers only 200 years ago, and today those glaciers have receded more than 50 miles.
Temperature has a lot to do with that (the Little Ice Age ended “not too long ago” in human history) but so does water, that imitable force. Here in Southeast, the tides shift every 6 1/2 hours, rising and falling over 20 feet (that’s 3 feet an hour–better turn that beach stroll into a beach run!). The native Tlingit have a saying here that seems fitting: “When the tide is out, the table is set”–and indeed it is, with all kinds of good eats!
Nowadays, Southeast is made up of bays and inlets and fjords and chucks and mudflats and…the list goes on. As more and more land reveals itself, more and more evidence of humans is discovered. Just east of downtown Sitka, for example, Hidden Falls holds the remains of a campfire that is more than 9,000 years old. What did Baranof Island look like then? How many other relics have been washed away? How many more are yet to be discovered? Thankfully, people are still trying to find out. In the meantime, modern civilization has supplanted itself quite successfully on these shores. Consider Japonski Island, for instance, which is accessed by a 1,000+ foot bridge from Sitka to the US Coast Guard base, a boarding school for Native Alaskans, the airport, and a few miles of man-made causeways connecting a series of smaller islands. 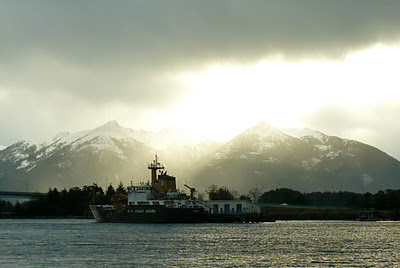 I’m sure it didn’t look anything like this 9,000 years ago, but I like the view (because of the sunshine, of course). Now if I could just get out on the water somehow and look back at this tiny dot of Sitka, I might start to get a feel for–no matter how long humans have or haven’t been around–just how darn tiny we really are.
Comments