0
1
One sentence announces the possibility of the next.

You get one God-given sentence for every story you write. The rest you have to chisel on your own.

Work from a first line you can believe in.

These words of wisdom from writing mentors floated in my mind on the Adak today, a day of deep revision with Flashes of War. One writing companion took the day off to snowboard, the other hunkered down alongside the fireplace and together we wrote. And deleted. And hemmed and hawed and, when necessary, put our heads together to deal with the occasional tough scene.
Alongside the docks, ducks crouched with puffed feathers atop sheer sheets of ice in Eliason Harbor. Some boats were completely iced in, fissures crisscrossing from dock to stern. The sun barely warmed the day into the teens and in the distance, wind whipped powder-fresh snow in whirls around the highest peaks. Three straight days of sun and three more along the way–virtually unheard of in Southeast Alaska and worthy of cancelling plans, calling in sick, changing events, and all-out rejoicing. 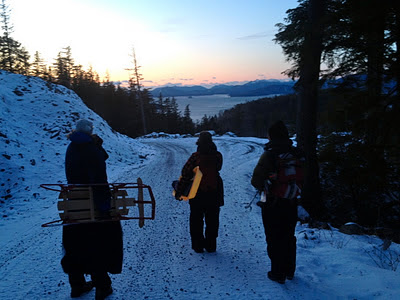 I could have kept writing all day, but sunlight beckoned and my knees ached from sitting, so we headed up Harbor Mountain for some good ol’ fashioned sledding. It’s nice having writing companions to remind me to keep things balanced in this way. With temperatures in the single digits, we bundled up in countless layers and hiked up the mountain until sweat warmed our bodies. It’s always faster on the way down, but that doesn’t mean we didn’t stop to take in the steal-your-breath views. This photo was taken around 4pm–extended daylight here
in Sitka without a cloud in the sky to shorten the day. In the distance
is Sitka Sound and a handful of tiny islands along the Alexander Archipelago. More photos will be posted once I get a night off the boat and back into my apartment.
Later, I couldn’t help but think about that free-for-all flight down Harbor Mountain, friends laughing along the way. Sure, we could steer and lean and aim for the ruts–but by and large sledding is a leap of faith that something glorious and intangible awaits all those who surrender. Not too unlike revision, come to think of it. Perhaps I should add a new mantra to my opening lines: Revise like you’re sledding down a mountain.
Comments