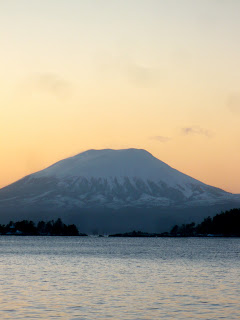 In 1775, Don Francisco de la Bodega y Quadra first spotted Southeast Alaska’s premier volcano from his ship Sonora and wrote that there was a mountain “of the most regular an beauitful form I had ever seen. It was also quite detached from the great ridge of mountains. It’s top was covered with snow, under which appeared some gullies, which continue till about the middle of the mountain, and, from thence to the bottom were trees…” He named the mountain San Jacinthus.

Never mind that the early Russians called this mountain Saint Lazaria (a name that would later be transferred to a nearby island and avian refuge). As early discoveries go, only some things would last. In 1778, Captain Cook spotted the mountain while journeying with the Discovery and Resolution and dubbed it Mount Edgecumbe.The name stuck, and although locals know full-well this volcano is inactive, it wasn’t too many years ago that one particularly dynamic Sitka resident played the most convincing April Fool’s joke Baranof Island had ever seen…
According to pals I’ve met here in Sitka, as well as the Sitka website, in 1974 a man named Porky Bickar went down in history: “Residents of Sitka, Alaska were alarmed when the long-dormant volcano
neighboring them, Mount Edgecumbe, suddenly began to belch out billows
of black smoke. People spilled out of their homes onto the streets to
gaze up at the volcano, terrified that it was active again and might
soon erupt. Luckily it turned out that man, not nature, was responsible
for the smoke. A local practical joker named Porky Bickar had flown
hundreds of old tires into the volcano’s crater and then lit them on
fire, all in a (successful) attempt to fool the city dwellers into
believing that the volcano was stirring to life. According to local
legend, when Mount St. Helens erupted six years later, a Sitka resident
wrote to Bickar to tell him, ‘This time you’ve gone too far!'” (For a longer version of this true story, click here.)
The results of Porky’s prank were pretty convincing: 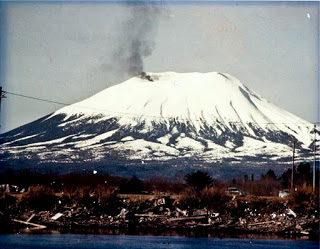