0
0
“The woods and the sea–in no place in North America are the two as intertwined in the lives of the inhabitants as they are along the coast of Southeast Alaska.” So says Joe Upton in his excellent book, Journeys Through the Inside Passage. The woods and the sea, most certainly, but had Upton been writing about winter he might have added darkness to that list.
I wake at 5am to pitch black; not a star, not a light, not a hint of dawn. By 9am rain clouds roil in slate gray with hints of light coming through the depths. It is as though someone holds a thick quilt between a sideways sun and this rainy island. In this kind of light, the snow and the sky look similar. I haven’t really seen where I’m living yet, having landed late at night, so if this is sunrise, I’ll take it.
I head out for a New Year’s day walk along Lincoln Street to find the city rightfully still asleep, but the ravens are out and it doesn’t take long to decipher that they are the cawing keepers of this town. Their presence is pervasive, but not in that Hitchcock sort of way. No, the ravens of Sitka maintain a more crafted presence, as though they’re perfectly aware of this other human thing called “city” going on along the shores of Sitka Sound, but they’ve got better things to do. Interestingly enough, the Southeast Alaska native Haida and Tlingit clans are organized into two major moieties: Eagle and Raven. At the end of Lincoln Street, I find myself at the headquarters for the local public radio station, fittingly: KCAW 90.1 Raven Radio. 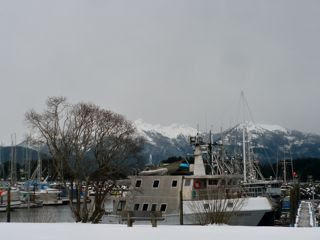 By 10am it’s as light as it’s going to get on this particular day, but already that’s more light than I’d been anticipating. I guess folks were trying to prepare me for the worst, but so far I haven’t been able to stop smiling. The air is cold and wet and bone-chilling here, just the kind of Pacific Northwest feel I grew up with as a kid. Of course, that’s what an Oregonian might say, but someone from Sitka knows better. Later, I ask someone at a potluck whether or not “Pacific Northwest” correctly describes this area. “When I’m trying to keep things simple,” she says, “that’s what I tell people who aren’t from here.” But, she goes on to explain, Southeast Alaska is indeed it’s own region and that’s how folks around here describe it.

The day stays wet and gray and the light stays hushed. At 3:30pm there’s a slight burst of color, as shown here from my writer’s desk. I hustle outside to stare at the sky and within minutes, the light is gone. Not long after 4pm, the city is entirely dark again. 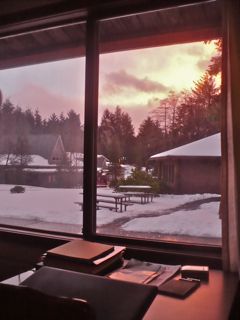