0
0
There’s one week left of deer season here in Sitka and it seemed only fitting that when an opportunity to go hunting arose, I should take it. We took half a day and six miles and walked a path into the woods. To say what path we took (and more importantly, where we left that path and bushwhacked by compass) would be to break a cardinal rule: you don’t tell people where you got your deer. But I will say this: the peaks rose around us through cracks in the canopy, water wove and bent and narrowed, and eventually we found ourselves amidst old growth hemlocks and the lovely, rushing silence that comes with falling snow.
The weapon was a bolt action thirty-aught-six with a black walnut buttstock and stellar spotting scope. The objective was one deer, should we be so lucky, because this hunter already took five this season and six would put him at his limit. 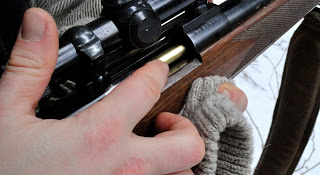 What I found most startling was how similar walking like a hunter felt to walking meditation. We moved slowly and deliberately. Quietly. We noted chewed buds and rubbed bark. We angled around Devil’s club (and tasted a sliver of it, too, its cinnamon flavor strong against the rush of cold winter air) and stood high on nurse logs. We looked and looked again; scanned, ducked, waited. My breathing slowed and my mind slowed with it…and then–
That rush of spotting freshly laid tracks! A buck judging from the toe drags, and a very nearby one at that. Snow fell rapidly and yet these tracks lay undisturbed. We froze and looked. Looked again…then followed the tracks until we found an animal “superhighway” where many deer had passed before. Was it minutes or half an hour before we found the spot where the buck had bedded down? My pal took off his gloves and felt the ground for warmth. He looked at me and shook his head, whispered: “He’s probably watching us right now.” 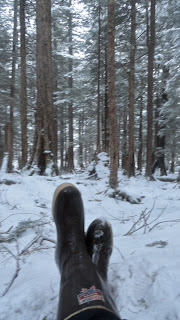 And perhaps he was, though try as we might we couldn’t spot him before sunset and with miles to hike out, we had to turn around. Somewhere over Sitka Sound the sun went down but we were deep in the valley, the snowy, forested world settling into the rich, dusk colors of slate gray, winter white, and deep green. I dropped my pack and laid on the forest floor, letting fat snowflakes alight on my face. My pal did the same and together we lay where the buck had bedded down, breathing in the forest, letting it work its magic and lull us into considering another life–what wonders Thoreau felt and saw, what beauty Aldo Leopold beheld, what awe John Muir inspired.
It made a good spot to rest indeed, and had I come prepared with shelter I would have offered no objection to making camp for the night…for the rest of winter…for that matter, until all of spring comes rushing forth from these mountains and with it new life. They say in order to hunt well, you have to think like a deer. Maybe for a few moments, we did.