Sitka Day 25: Aleutkina Bay and Beyond

0
1
It’s a small world when you’re 4,000 miles from home in a town of 8,000 people and you run into someone at one of your events who knows Hannah Branch Road in Celo, North Carolina (population 300?)…knows the family that lives there on the river and runs Camp Celo…knows the school you used to teach at…even knows the man who built your parents’ house in the Black Mountains. But if ever there were a place for coincidence or connection, lately it seems to be Sitka. 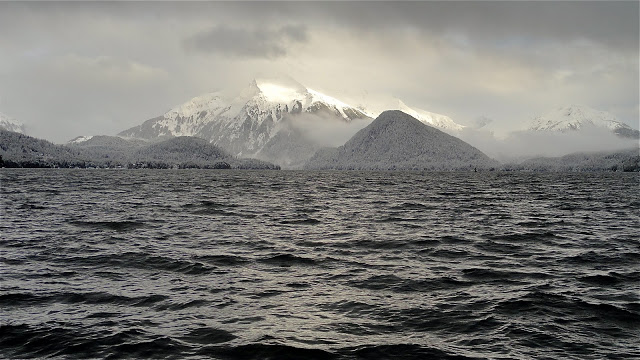 And so it is that I found myself in good company on a 20′ skiff cruising across Sitka Sound for a long-anticipated exploration of some surrounding inlets. I hadn’t worn a Mustang Survival Suit yet, but I zipped one on and between that and my borrowed XtraTufs I felt, for brief moments, almost as if I belonged. The attire seemed an initiation of sorts, and when the clouds parted just long enough for us to glimpse the outlet of Silver Bay from our spot in the Eastern Channel, with Bear Mountain cutting the skies high above, it was easy to believe I could die feeling as though I have lived quite fully and fortunately.
We left Crescent Bay and navigated (by my host’s keen memory) through islands with names like Kutkan, Morne, and Galankin, then into the Eastern Channel toward the Kutchman Islands and Aleutkina Bay. Onward around Martin Island and into Leesoffskaia Bay where the water suddenly quieted and thickened. Ahead of us, ice crept forward off the closed edge of the bay and, alongside us, trees bent toward the water as if in prayer. There
are places here that quiet the mind into something beyond stillness.
There are colors that defy imitation. Deep, frigid teal.
Black-lit-green, electric gray. Perhaps Alaska’s greatest gift is its
ability to startle us out of ourselves at almost every bend in the road,
fork in the trail, turn into a cove, or break in the clouds. It is and shall remain my
greatest muse. 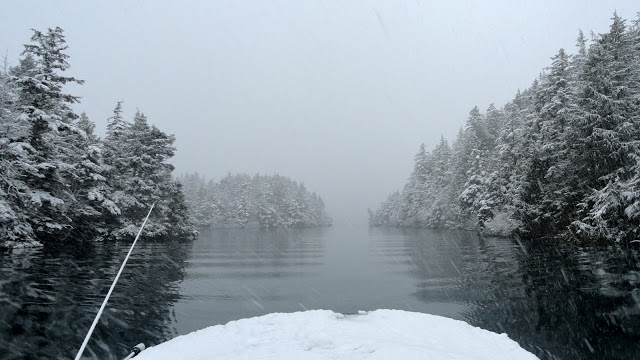 Later, a squall rolled in and we were left with about 200 feet visibility. In the middle distance, we spotted a boat trolling for King Salmon. The world slowly shrunk around us into a flurry of white and our attention shifted from the distant to the near–a sea otter floated with ease in alongside the boat, cormorants wrestled for purchase on rocks, and all the while groupings of murre ducks huddled here and there.

We found our way back without trouble, and even made a pit stop at Twin Island to see how my host’s cabin faired during last week’s deep freeze. Though sunset back on the docks was more than rewarding, I’ve added something new to my life list of things to try: spend the night on a small boat at sea, anchored to nothing but hope and the deep, unseen bottoms. I can only guess from this Joe Upton quote how humbling and new such an experience might feel:
“I can hardly describe the blackness of these steep-sided northern inlets on such a night. After moonset, I turned out the masthead lights and stood out on deck for a few minutes in the rain. One’s eye searches for a point of reference, a faint star, the dark horizon, but there was nothing–even my net light, a thousand feet away, was lost in the gloom…” (Alaska Blues) 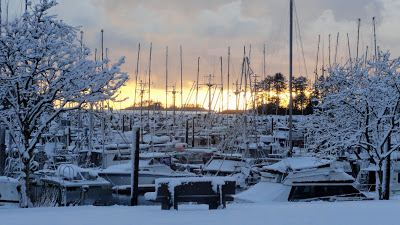