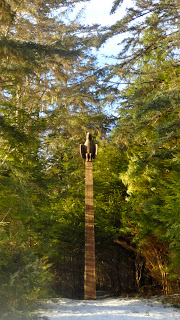 I have walked the loop in Totem Park (Sitka National Historic Park) almost every day since my arrival and never tired if its straight-as-an-arrow trees, its rocky viewpoints, and its quiet pockets for reflection and awe featuring trailside Alaska Native totem and mortuary poles.
According to Carved History, a guidebook for the totems in Totem Park, “totem” is actually an Algonquin word for crests that show natural objects or animals that represent a family group. A memorial or mortuary totem (shown at right) is different than a totem pole and often has a spot in back for the ashes of the honored dead. The figure on top represents that person’s moeity (raven, eagle, wolf, etc.). Interestingly enough, the totems in Totem Park didn’t come from Sitka Tlingit. They were donated by (mostly Haida) Southeast Alaska Natives and, according to the NPS website, “Between 1901 and 1903, [they] agreed to donate poles to Alaska’s District Governor John G.
Brady for the people of Alaska. After exhibiting the poles at the 1904
St. Louis World’s Fair and the 1905 Lewis and Clark Exposition, Governor
Brady sent the poles to Sitka where they were erected…” 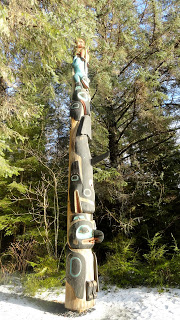 I’ve been researching Tlingit culture during my stay and originally intended to write more about it. But other than mentioning the Battle of 1804, I have found myself at a loss for words. Unlike my stay in Wallowa County, Oregon as writer-in-residence–where hardly a Nez Perce native remained due to [long list of impossible things to explain], many Tlingit are still here in Sitka. Perhaps their presence has made me more all the more aware of how little I know and how carefully one must tread when trying to recount history that is not one’s own. In either case, their influence on the place and the land here has not gone unnoticed by this writer, despite my near silence on the subject. 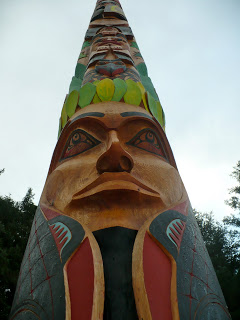 Although many of these poles aren’t Tlingit, almost all of them are replicas of the originals. Those replicas were completed by Tlingit carvers, mostly as CCC volunteers from 1938-1942. In May 2011, the Wooch Jin Dul Shat Kooteeya pole was erected, commemorating the park’s centennial. The details of this totem’s “story” are really interesting (I found the intersection of Native and white cultures on the pole fascinating) and are best described clicking here.
Comments