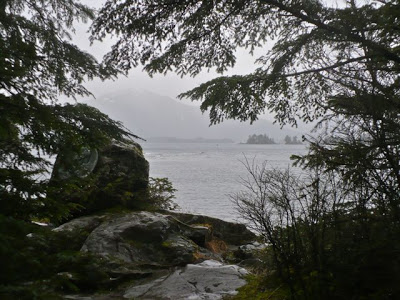 I’ve walked at dawn and midday, walked at twilight and late at night. I’ve walked in rain, snow, and sun; along sidewalks, groomed trails, the rocky shore. Still, no matter where I go in Sitka, I cannot seem to smell the ocean. Strange, being on an island in the North Pacific without the scent of saltwater or rank kelp. Is there something about winter or living along a sound that I don’t know?

I stuck my fingers in the North Pacific just to say I’d done it and also to test a fact–that the water’s warmer here than one might think. At a potluck the other night, a helpful librarian told me about the Kuroshio Current, which brings warmth from its origins near the equator and combines with the North Pacific Current. It’s impossible to live on an island and not consider the vastness of the deep, dark, wet thing looming all around you. All of which is to say, lately I’ve been thinking about the enormity of the oceans and how, as Ivan Doig puts it in his stunning novel about 4 Swedes who escape Russian servitude in New Archangel (modern-day Sitka), our daily workings in this vast environment “amount to a worker ant on the rock toe of an Alp,” (The Sea Runners). 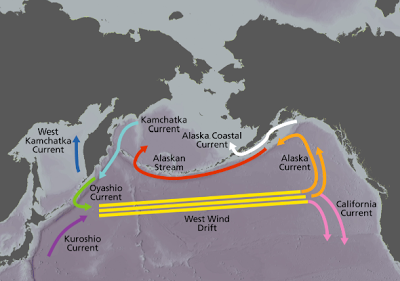 Incidentally, just south of the West Wind Drift pictured above, floats a disastrous human-caused monstrosity twice the size of Texas called the Great Pacific Garbage Patch. Though our activities as humans are as tiny as Doig’s worker ant, the impacts are exponential. A woman guzzles a Diet Coke at a gas station and doesn’t recycle the container…so it begins. The ocean’s tendrils reach far and wide, and one drop of greed leaked from our coast inevitably piles back up on shore.

Though I cannot smell the North Pacific here, I can see it. I can hear it. I can meet delightful groups of people who live along its shores and have made rituals, customs, and careers out of this great force of nature. The ocean is everywhere in Sitka, undeniably. Let us rejoice at its enormity, and, like the worker ant, be ever-vigilant in our duty to fulfill a cause–that of protection, that of security, that of survival of all species dependent upon clean waters.
Showing 2 comments