1
0
When you hear folks say that Alaska is all light half the year and all dark the other half of the year, what you’re hearing is an exaggeration of a basic astronomical fact: in winter, the sun is in the lower hemisphere and it does not light the north pole. In Barrow, Alaska, that means the sun doesn’t rise above the horizon for two consecutive months. But here in Sitka, much farther south, that means around the winter solstice (12/21) there are roughtly 7 hours of “functional” daylight. Keep in mind that “functional” still includes dawn and dusk, which tend to be very gray. Also keep in mind the annual precipitation here is 86 inches, so even days that could receive “normal” amounts of light, don’t always get it. All of that being said, the darkness of an Alaskan winter–anywhere in the state–is indeed something that takes getting used to. 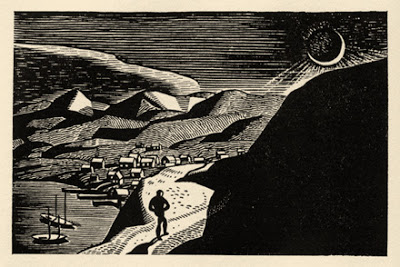 In 1918, Rockwell Kent, American painter/printmaker/illustrator, spent 9 months on an uninhabited island near Seward, Alaska. Other than the company of his young son and an old man named Olson, Kent lived and breathed for his paintings (many of which were later turned into woodcuts). He also wrote beautifully of his adventures in his book, Wilderness. Of the darkness, he wrote:

“The Northern wilderness is terrible. There is discomfort, even misery, in being cold. The gloom of the long and lonely winter nights is appalling and yet do you know I love this misery and court it…Who has ever dwelt so entirely alone that the most living things in all the universe are wind and rain and snow? Where the elements dominate and control your life, where at getting up and bedtime and many an hour of night and day between, you question helplessly, as a poor slave his master, the will of the mightly forces of the sky?” (Rockwell Kent)
Or perhaps more direct, the young and brave (if not somewhat entitled) Emily McCorkle FitzGerald–an Army doctor’s wife who lived in Sitka just a few years after the United States purchased Alaska from Russia–wrote home to her mother in December, 1874:
“I forgot to tell you of our short days. We breakfast at half past nine with a candle and by half past three in the afternoon it is too dark to see and we light up again. I think it’s disgusting! Mrs. Campbell says as soon as we light the lamps she feels as if it was evening and begins to be sleepy by five ‘o clock.” (Emily FitzGerald, An Army Doctor’s Wife on the Frontier)
I had to laugh when I read this today, seeing as how I cooked dinner myself at 3:45 yesterday afternoon and had to force myself to stay up until 9pm for want of a “regular” schedule. As I write this just after 5pm the rain pours down and it is a dizzying black outside. Even still, after dinner I’m going on a walk (with my headlamp).