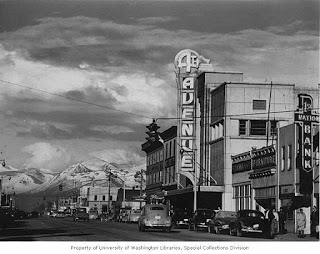 I’m a naturally curious person and one way I try to make sense of new experiences in the world is through story. When I’m exploring a new city, that seems to manifest most readily by looking for something that catches my eye and then trying research the story behind it. Anchorage’s historic 4th Avenue Theatre has held my attention ever since my first trip to The Last Frontier in 2009. Ask anyone who’s local and they’ll tell you a story about the theatre…
“Oh, that’s where my husband and I had our first date!” one woman told me.
“I remember going to auctions there, after they stopped showing movies. They did all kinds of cool stuff,” said another.
“That building is one of the few historic centerpieces that’s still left of downtown,” a man said.
Even before it was “historic,” apparently folks knew that the Lathrop Building, as it is more formally known, marked a turning point for the city. In 1947, the year of its completion, the Anchorage Daily Times reported: “The theatre is a landmark in the transition of Anchorage from a frontier community to a city of permanence. It is a landmark in the development of a city in which families live, work, play, and die.” 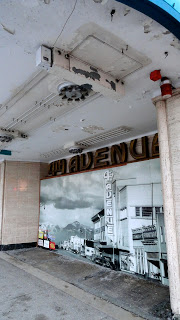 All too soon, however, the theatre was what actually “died,” closing its doors for a while in early 80’s, then going through several renovations and ownerships and reincarnations. In 2009, it was purchased by Peach Investments–an organization nobody I talked to seems to know about, and one that is only listed in the yellow pages but has no website that I could find. Other than basic upkeep, the company is said to be holding back on major investments, though even that is hard to confirm. Meantime a partnership of Anchorage-area organizations got together to post photographic murals along the sides of the building, facing the main drag of the busiest block in town. The photos are a nice touch, but it’s a little eerie seeing the picture of what 4th Avenue Theatre used to be slammed right up against the peeling paint and busted light bulbs.
I had hoped to go inside and take a look around, maybe even glimpse the famous gold leaf mural of Mount McKinley–but no such luck. Even the local news stations who attempted to contact Peach Investments
got no response regarding intentions for the building or its future
use. I guess this is one story that, like the rest of Anchorage, I’m going to have to wait to learn the ending.