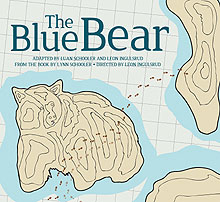 The Blue Bear directed by Leon Ingulsrud opened in Anchorage this week and I’m certain I’m not the only audience member who openly wept. I’m also certain I’m not the only one who felt, at times, as though the lines of this play were adapted and performed just for me. Actors Ryan Conarro and Takahiro Yamamoto delivered this simple yet deeply moving play with undeniably persuasive emotion. It was the kind of acting that captures the best of both worlds–a performed story that takes viewers on a journey, no doubt, but also one so precisely rendered that it felt as though I got to be a fly on the wall of the human predicament. What a gift–to be able to peer in at our most painful and beautiful moments and study them with the safety of distance but the insight of intimacy. And isn’t that art’s highest aim–to give in a way that shocks us out of ourselves? Indeed, isn’t that one of Alaska’s greatest gift, too?
Even if you haven’t seen the play, hang in here for this helpful summary from the event’s website (and then, if you can, go see the play or buy the book): “In 1990, author Lynn Schooler was a wilderness
guide in Juneau when he met the Japanese wildlife photographer, Michio
Hoshino. The two shared a passion for writing, photography, and Alaska’s
wild places. Together, they began a search to find and photograph the
rare and legendary glacier bear. Before they could find a blue bear,
Hoshino was tragically killed by a Siberian grizzly, after which
Schooler dedicated himself to getting their photograph to honor his
friend. Based on the book of the same title, The Blue Bear follows
Schooler’s tale of learning to trust again through his stunningly
intimate portrait of a remarkable friendship. The performance combines
Schooler’s text with Hoshino’s images in a visually stunning production.” It’s also about Hoshino falling in love and starting a family, in contrast to Schooler’s lost love and painful past.
In the play, the photographer Michio reminds us that “we must be alert to the depth around us, whether we are crossing rivers in the wilderness of Southeast Alaska, or in the wilderness of our own hearts.” In Sitka last month, I crossed both and felt their similarity, believed in their power, was humbled by their complexity. And yet–the capacity to love can feel so utterly simple at times it is as easy as breathing. We are helpless to love, as we are helpless to hope, and thankfully most days that feels like a blessing.

I’d like to hold a printed version of the unpublished script for The Blue Bear in my hands, if for no other reason than the weight of it might remind me of life-changing moments I’ve experienced in my life: the depth of true trust–and how much time and careful work it takes; the power of honest friendship–and how like a gift it is; the grace of forgiveness–which is likewise a gift though never taken for granted; the undying proof that whether alone or with a pal, through the highs and lows of it all, we are trying to find our way. 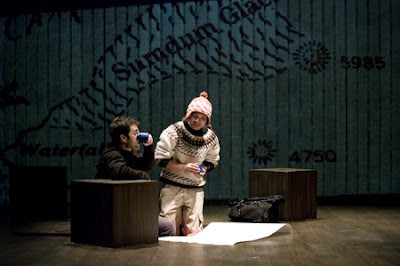