0
1
I’d always heard about the occasional moose traipsing the sidewalks of downtown Anchorage come wintertime…but until recently, I’d never seen it for myself. My first day in the city, one trotted dangerously close to a pedestrian who didn’t even see it coming. I sat safely in a friend’s car at a stop light, totally shocked, until I remembered–the snow. The next day, I strolled along the coastal trail and passed a moose at a distance of just ten feet (pictured below) who munched peacefully and slowly while up to its neck in snow. Did I feel threatened? Maybe a little, but this one looked pretty buried if you ask me. 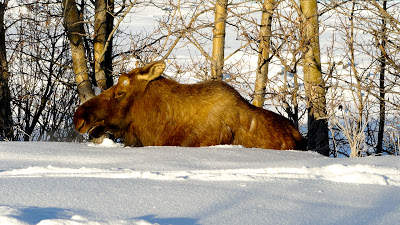 It’s not unheard of to see an occasional big fella around town, but what is unheard of is the number of moose being hit by cars this year in Alaska (if trends continue, it could be twice as many as last year) and it’s not because of overpopulation–it’s because of the deep snow.
Now, if you’ve never seen a moose, think big. Then: think bigger. I’ve encountered a few in the Interior and each time my instinct was in fact to dodge the animal by running under it’s belly and between its four legs. I didn’t do that, of course, but it just goes to show you what a shocker their sheer size is to the unaccustomed mind–my flight or flight assessed the situation and wanted me to duck under the large beast rather than retreat. Go figure. (What’d I do? I backed up slowly, threw a few rocks, and shouted some very loud things into the vast Alaskan sky.)
Those long legs get them far most times of year, but with Anchorage’s record 102″ of snowfall this year (and counting), tall doesn’t cut it. Moose are having to traipse through miles and miles of 5- and 6-foot deep snowfields and forested slopes. This requires more calories during the toughest season of the year to find food. Incidentally, one thing moose eat a lot of is bark…but with so much snow, the trees are buried up to the branches so many moose are trudging their way to trees only to get a stomach full of wood. The wood doesn’t nourish them–only the bark–and so they continue traipsing, exhausting themselves; in some cases younger calves have completely given up mid-step.
The Los Angeles Times reported that in some places ravens are picking at the flesh of these pour fatigued mammals before they’ve even died. In other places–where car/moose collisions have skyrocketed–the moose aren’t coming into the cities and towns for people or food, they’re coming because it’s the only place they can walk around without working themselves into starvation. An organization that helps feed the hungry has re-instated its roadkill rescue mission to get the moose meat from such accidents promptly and properly butchered, and into the mouths and bellies of some of Alaska’s neediest. It’s an odd twist on an even odder situation, but this winter that’s the reality in south-central Alaska.
Comments