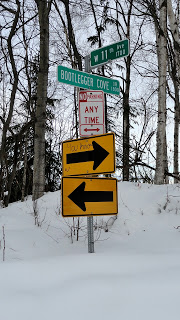 The house I’m staying in is near a part of town called Bootlegger Cove. There’s a street by that name, a neighborhood by that name, and part of a body of water by that name as well. It’s splitting hairs to draw lines and that’s not actually what I find most fascinating. What’s captured my interest is the fact that I recently learned there were underground tunnels and hidey-holes for liquor in Bootlegger Cove, or as history would say it, “webs of secret tunnels, caches of secret bottles, and hidden stills.”
Hiding and destroying liquor happened everywhere in this country whenever and however it was banned. But liquor seemed especially important to early day, pre-statehood Alaskans whose very nature was of the type that might…well…not only prefer liquor, but need liquor if for no other reason than the fact that they:
a) lived in a wild place
b) during an even wilder time, and
c) it was usually really cold, or
d) mosquitoes swarmed as thick as clouds of smoke, or
e) disease was rampant, and
f) the highs where high (striking gold!), and
g) the lows were even lower (losing everything!).
Here’s a photo of US Deputy Marshals destroying liquor in downtown Anchorage. The barrels were typically used to store moonshine and busting through the wood apparently made quite a show. Whether it made enough of an impression to stop the production and sale of liquor isn’t in question, though–because it most certainly did not. 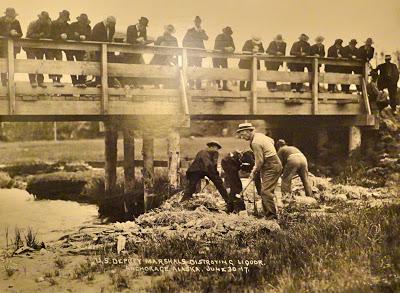