0
0
Whenever I go to a new city, I like to do a little compare and contrast. It’s fun to imagine how a place looked in its early days of settlement–or even before that, how a place might have been buried under water or glaciers as the case may be. Today’s “then & now” post is pretty straightforward, though.
I found this historic photograph from early 20th Century Anchorage and I think it may be the first “flag raising” near a government office. This photo was taken at the intersection of West 4th Avenue and F Street. It was also taken during summertime, but notice the coats and hats folks are wearing: 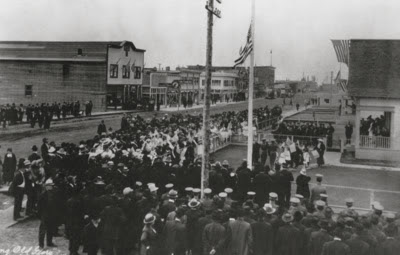 Of course, nowadays, the only things that look the same are the mountains (in the white background above and below, which are too difficult to distinguish with white snow against white clouds). But as the “now” photo demonstrates, the streets at 4th and F are still quite wide today, which is a good thing since the snow berms from this winter’s weather are only increasing. Likewise, some of this 4th Avenue strip feels a little similar in terms of single- or two-story merchant buildings sandwiched between government offices and tourist/adventure services. 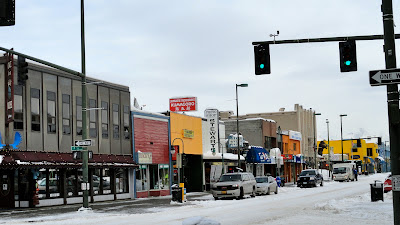 Looking the opposite direction from 4th and F, the Federal Building looms tall and its flags hang even taller. It may not be the exact same spot as the historic photo, but I think it may be the same idea. My, how things change… 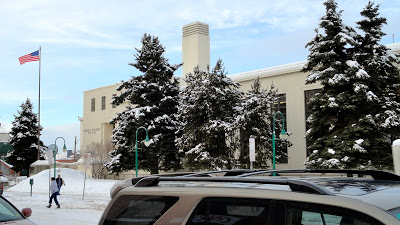