0
0
They say that once you get the bug, you’ve got it for good. Indeed, the cultish obsession my parents and I have developed for Airstreams since we bought the 1970 Sovereign in December is more than just an isolated obsession. Wally Byam, inventor of the Airstream, is legendary for his following, part of which included what he called The Four Freedoms. As quoted from Airstream: A History of the Land Yacht:
1. Freedom from arrangements: Reservations, schedules, taxis, tips. “You don’t have to worry about reservations in the next town or where you are going to sleep that night. You have all your accommodations right there with you. Home is where you stop.”
2. Freedom from the problems of age: “For some, checkers, clubs, gardening, and grandchildren is not enough. Out of this boredom, ailments are born.”
3. Freedom to know: “You meet people on a train or a plane and the next day you separate. When you travel in a trailer, you meet people in their homes and they meet you in theirs.”
4. Freedom for fun: The first three freedoms add up to the forth. “To relax and lose yourself mentally.”
So when Dad and I set out to knock on the doors of two strangers within an 8 mile radius of our home, we knew we were likely to be kindly received as soon as the word AIRSTREAM left our lips. Our first stop on this Recon Mission was in the South Toe Valley just as Highway 80 crests a hill to an epic view of Celo Knob. A trained eye can catch a glimpse of the sun’s light shining off a lovely 1976 Airstream Sovereign that’s parked behind an old white house and half-hidden in the brush. But a neighbor there informed us that the owners lived in another state and only visited twice a year. The trailer was locked, there was no contact phone number for the owners, and a quick peek inside revealed a darn clean looking trailer. Secretly, Dad and I had hoped it would be trashed and we could buy parts off of it for our own…
The second stop was a little more intriguing and we were both struck with “Aluminitis” (a play on the word aluminum, which of course is what Airstreams are made out of). Aluminitis happens when you want to start acquiring more trailers for no particular reason at all except the pure pleasure of admiring and fussing over them. Dad and I had all sorts of ideas about this 1963 Airstream we’d spotted on Highway 80 headed toward Bandana. We’d seen it in various states of disrepair over the years, always sitting in a sad, wet patch of field just off the road and always looking a little in need of attention. The owner proclaimed it was in “perfect condition” except for “that one time in the flood when it got about four inches of water sitting in it for a week or so.” Uhhhh….right. He said he’d sell it for $3K (way more than we paid for ours) and when Dad and I had to wash our hands after being inside the mold-infested space, we were quickly cured of Aluminitis.
Our Recon Mission might have failed–as the second Airstream owner wasn’t selling for parts either–but by the time we got home, we gazed even more lovingly at our own trailer and proclaimed it darn near fit for living and “the best deal in the mountains.” It’s nicknamed The Beacon and it’s all ours. We couldn’t be happier with our writing-studio-in-progress, shining brightly in the mountain sunlight: 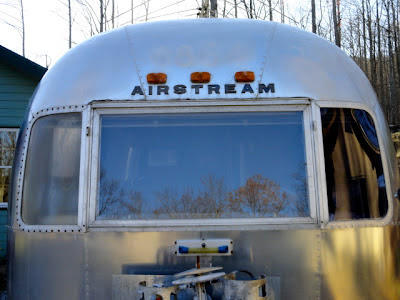