The Writing Studio: Clearing Land for the Airstream Sovereign

0
0
It’s been a restful week off the map and I’m 5,000 miles from last week’s parting post. What had been a winter world of Alaskan white and deep-black-evergreen is now the pale grey and brown of early spring in North Carolina’s Black Mountains. I’m home, if such a word can mean anything when I’ve been on the road 2 1/2 years, but Mom and Dad are here and the dog is too–all of which make a pretty persuasive definition of home in my book. The Airstream Sovereign is here as well, and Dad’s busy putting in a new bathroom floor while I’m hauling logs uphill and sweating in what feels like the tropics after 9 weeks in Alaska.
All totaled, we’ve felled one giant old hollowed widowmaker, two hemlocks, and one tulip poplar. But felling trees is only part of the job. Once they were bucked up, I had to shimmy down the steep eastern and western slopes of the land and hand carry, roll, or wheelbarrow load after load of rounds to level ground so that they can be split. At least now Mom and Dad will be set for firewood for a few winters and my trailer will have a cleared spot of land to rest. Here’s two wood piles I busted my back on this weekend, plus one shot of the main tulip poplar trunk rounds that we’re going to have to peavey or tow uphill. Note the ridgeline view in the background of the highest peaks this side of the Mississippi: 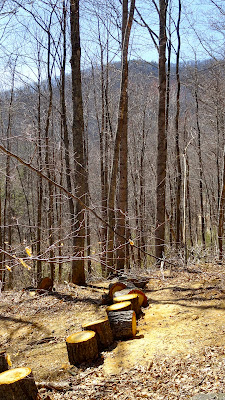 The next few weeks promise to be filled with Airstream updates, contemplations on sense of place, and probably a few wild cards too. I’m due in Illinois by April 1st, Michigan by June 15th, and by mid-August the three-year tour concludes and I’ll be headed home to the trailer or off to a long-term fellowship (if I should be so lucky). Either way you look at it, I’m making the final turn of the journey and truth be told, I couldn’t be more ready for it.
For those new to The Writing Life Blog, here are a few quick links telling the story of the Airstream (also known as The Writing Studio).
***
Today’s Monthly Fiction excerpt is from my short story “Amplitude”:

“Why don’t we climb it?” I said.
“Have you done it before?”
“Once,” I lied.
“Ladies first,” Ben said.
“Fine. But I need a lift.” My heart dropped to my stomach and I could have punched him. How could I be so brave and so chicken-scratch at the same time? (read the rest of this story…)