0
0
More than anything, it’s the songbirds that suggest wilderness here in Peoria, IL. At the studio downtown, I often each lunch outside under two trees, just a stone’s throw from a four lane road. How many birds can two trees harbor–dozens, hundreds? One afternoon last week, so many birds chatted and flitted about, it became impossible to keep count. I could have eaten elsewhere, but their constant singing rooted me to the spot and I was able to capture a little on video. 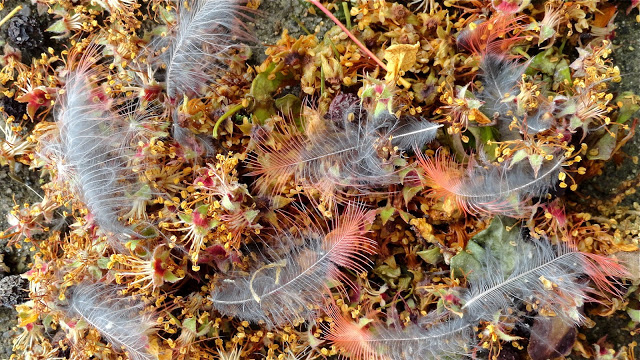 Back at the residents’ house (11 miles outside the city), I enjoy walking in the adjacent 50 acres of woods. The birds are more spread out, but still–evidence of their presence persists with every step: droppings speckled on low-level leaves, leaf duff rustling in the distance beneath the prodding of an eager beak, a woodpecker hammering from on high, a pair of juncos flapping about in play. Of course, where there are songbirds in suburbia (even wooded suburbia) there are also cats. I can’t help but wonder about this beautiful scattering of feathers that Ron noticed in the driveway yesterday (above).
As it turns out, this part of the Midwest is a major thoroughfare for migrating birds. The Mississippi Flyway runs right over Peoria and is used by 40% of all migrating waterfowl and shorebirds. I don’t know the percentage of North American songbirds that also use this corridor, but surely it’s as many. The Mississippi Flyway is also the longest migratory route in the Western Hemisphere, extending from the Arctic Ocean to Patagonia (more than 3,000 miles) and it is entirely uninterrupted by mountains.
I hardly have to try, glimpsing at least a dozen birds any time I look out my window. Their singing is also constant–occasionally one tone or rhythm announcing itself above all the others. Perhaps what I appreciate most about this is the constant reminder to look outside, to listen, to take it all in. If ever the world grows tight around my eyes as they stare into the computer screen, I have only to listen and I’m called gracefully back outside of myself. It’s a lovely feeling.