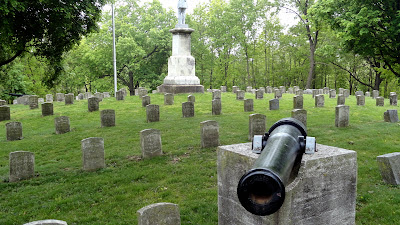 We took a group field trip to Peoria’s historic, public cemetery that’s built on the rolling hills of a terminal moraine just inside the city limits. Springdale Cemetery is “the final resting place” for more than 70,000 people (as well as a few pets) and has over six miles of winding roadways and a large public mausoleum. While our library docent’s tour was compelling, I couldn’t help but wonder about society’s obsession with where famous people are buried. Springdale doesn’t have much to boast about by way of “the famous dead,” though our tour guide conjured every friend-of-a-famous-person’s-friend connection on record and had, to her credit, quite the case built around the importance of Peoria’s largest cemetery.

All of which is to say, with due respect to those buried at Springdale, why do we care about being “close to” or “the keepers of” a famous person’s remains? And what do we do but tuck those remains away and hardly notice them for decades gone? It might go back to our innate fear of death itself and the idea that, by protecting and honoring the bodies of the dead, we can at least control a little part of death from our living world. But even that answer doesn’t satisfy the skeptic in me…and perhaps it was the gray skies, the glumness of my mood that morning, or–frankly–being surrounded by 70,000 corpses that, set me onto this ho-hum train of thought in the first place.
Since Springdale is also public, the docent kept calling it “a park.” I liked that idea very much–with paths and trails for running, hills and coves for privacy, and perhaps even a view of the Illinois River on a clear day–Springdale is indeed the quietest, most beautiful spot I’ve seen within the city yet. But when I looked around for children playing or families with picnics, couples strolling or students sipping lattes over France Bacon texts beneath the fractured light of stained glass, I didn’t see it. 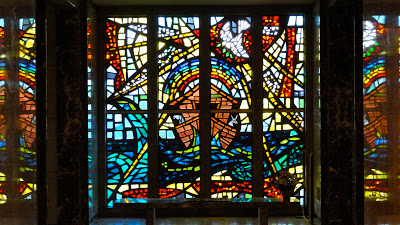 How lovely it would be if our nation’s cemeteries really did serve as public parks–and I’m certain some joyful ones do exist–and, perhaps, how inviting the opportunity would be from an early age to think of death as something less terrifying and terminal. If the idea of playing on the swings to see how high we could reach our toes into the sky also came coupled with the idea that, after we’re gone, many other people will keep on laughing and living life for us–wouldn’t we be a little happier about this whole death thing in the first place? I like to think so.
When I die, let my ashes be sprinkled hither and yon. Let them catch the wind and summit mountain peaks in whirls of invisible energy. Let them dust the forest duff in sparkling gray. Let them ride rainwater down drainpipes and city gutters until they reach the ocean. Let them coast into the sun’s light at unsuspecting moments; first a glitter here, then a glitter there. Let someone standing on the sidewalk notice the play of light, let her turn her gaze and wonder out loud: What was that beautiful thing? Then let the light be gone, let the particles dissolve, let all of it disappear into a spiraling dance that stretches up, up, like the toes of a child pumping hard on a swing. Always reaching. Always trying. Perfectly delighted with the impossible.
Comments