0
2
It’s just so stunning, I thought to myself as I drove along Illinois Highway 16. I’ve never really seen the sky look like that before. This was mid-afternoon on Sunday–a warm enough spring day in prairie country, but with temperatures suddenly dropping and an enchanting spectrum of peaches and grays gathering in the expansive sky. Every direction I looked was open, open, open. Life is so exposed here–no mountains or hollers to hide in, no dense forests to buffet the wind. I turned up the volume in my Volvo as rain splattered loudly across the windshield. 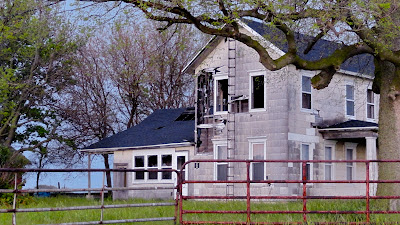 Ten minutes later, THE CLAW coughed and lurched, slowly losing speed from 60 to 50 to 30 to 0 miles per hour. I coasted to the side of the highway and laughed a little. Just forty miles from Prairie Center, and two stops from the end of this three year journey, and there–of all places–THE CLAW decides to give out. “There” was the driveway of an abandoned farmhouse I’ve driven past a few times since coming to Illinois. Many such farmhouses dapple the roadsides here, but this one–with it’s windows blown out, with siding ripped from the second story, with insulation spilling out like guts from a child’s forgotten stuffed animal–had caught my eyes before. I’ve considered photographing some such farmhouses up close, but I didn’t want to photograph this one. Its haunted-house vibe kept me speeding past on more than one occasion.
I flipped the hazards on and powered on my cell to call Better World Club (the eco-friendly, Oregon-based roadside assistance company that offers the same perks and prices as AAA). While the operator led me through the drill, I couldn’t help but notice the shifting world around me: prairie grass thrashed about, rippling in violent waves as wind gusts shook the door panels on the Volvo. Rain fell in sheets, blown sideways by the wind. The sky, which moments before had looked enchanting, suddenly appeared forceful, almost magnetic.
“Are you in a safe place?” the BWC operator asked me.
Looking outside, I had to tell her I wasn’t.
“What’s your current location?” she asked, once she knew I wasn’t directly blocking traffic.
I gave her the “nearest” intersection according to my GPS unit. “Um…State Highway 16 and County Road 13,” I said, skeptically. Did that even count as an intersection? I think I’ve been at backcountry trail crossings that felt like more of an intersection than that place sounded at that particular instant.
“Just one moment please…”
Momentarily, the rain stopped. The wind eased. My ears popped. And again there was that peachy gray light, that fantastic swelling of clouds in the sky…
The operator came back on: “It looks like you’re in an area with a Severe Thunderstorm and Tornado Warning right now,” she said. “And I’m having a difficult time locating a partner company who is able to send a tow truck into your area while that’s going on.”
Give me an earthquake or a black bear or even a systemic anaphylactic reaction in the middle of nowhere and, as they say, it ain’t no thang. But tornadoes? I don’t even know what the warning signs are; I don’t even know what to do…
The operator continued searching for a towing company and I started working my thumbs across the keyboard of my cell, sending a series of rapid-fire text messages to the Directors of Prairie Center for the Arts. In an instant, they replied with advice: “Lie down in the ditch if it is deep enough,” said one message. I looked hesitatingly out the window at the shallow ditch, rainwater pooling and rushing like a makeshift creek. 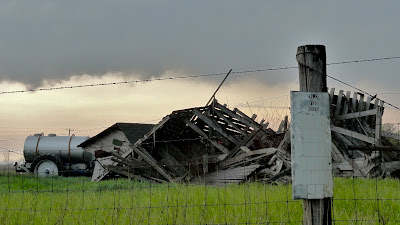 “Are there any houses nearby?” came the next message. “Abandoned farm house,” I texted. “No house I can see for half a mile.” I tried to imagine running half a mile–ordinarily an easy task–but in this weather, with low visibility and occasional cars splashing by, it didn’t seem safe. I hunkered down in THE CLAW and waited for the next message. “You could try the farmhouse. See if it has a basement,” the Directors wrote.
And that’s probably when I started thinking about The Shining. The scariest scenes were filmed in my home state of Oregon’s Timberline Lodge and, for whatever reason, when I think of terror I think of that lodge, that scene–Jack Nicholson’s character feverishly hunting his wife and child down. Not that I thought a creepy dude would be in the farmhouse, but that the idea of running from THE CLAW to the house would probably make me feel a little like that child felt as he breathlessly traipsed through the hedge maze with a murderer hot on his heels.
But like Jack’s character, the tornado died (it never even swirled or spiraled or formed–but the heavens flirted with the idea, no doubt). And like the kid, THE CLAW is going to need a little work, but will be alright soon enough. (Wait, that’s me–no, that’s both me and my car.) Soon enough everything shifted–clouds whisking backwards, wind slowing and gusting and slowing again, and–blessed be–the birds came out of hiding. The prairie glowed in the sunlight–yellow, green, blue, normal.
Illinois: 1. Writer: 0. Better World Club: Infinity points for staying on the phone and sending the tow truck in under 60 minutes. Prairie Center Directors: Inducted into the Helping Helpless Writers Hall of Fame for thinking fast.
Showing 2 comments