0
0
Most of my closest friends know that, if given another life and a different talent, I’d come back as a backup singer for a) Bob Dylan, b) Andrew Bird, or c) Josh Ritter. I say “backup” because I can’t ever imagine wanting to fully fork over my writer’s fly-on-the-wall view of the world. Being a backup singer would give me the power to observe like a writer, but also the thrill of live performance and the ability to be a part of something auditory that’s emotionally moving and bigger than life itself. But since I can’t seem to pull that off, I’ve settled for the occasional personal music review featured here on The Writing Life Blog. Take it or leave it, live music is a big part of what summer at Interlochen is all about. A few highlights from past concert series have included reviews of Lucinda Williams (my fave write up), Elvis Costello (which got re-printed on his website), The Decemberists (which not everyone was happy with), and good-enough-to-bring-home-to-Mom, Lyle Lovett. 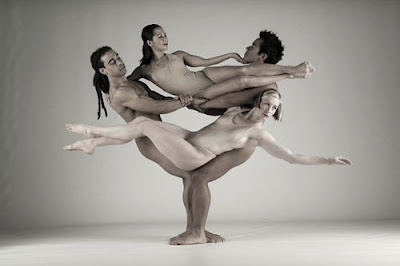 This summer’s first review isn’t of music, however, it’s of dance. Last night, Interlochen Presents featured Pilobolus, a group I knew only two things about: First, they’re one of the more popular and respected touring dance companies in America and, second, one of their dancers is the older brother to a former student of mine from back in North Carolina. I even went backpacking with his mother once, though I’m sure he doesn’t know me from any other of the hundreds of people at last night’s performance.
What I wish I had known about Pilobolus before seeing the show is that they don’t actually describe themselves as a traditional “dance company,” but instead something much more. Their website tells me that they’ve been around since 1971 with a mission “to make inventive, athletic, witty, collaborative performance works on stage and screen using the human body as a medium for expression.” If I had known that before I attended last night’s show, I would not have felt so disappointed or disconnected. But I didn’t do my homework, and as a result I went expecting to be swept away emotionally by moments, if not entire acts, of beauty and grace expressed through dance. Instead, the dominant words I’d use to describe what I saw are: gymnastics, athleticism, flexibility, tricks, contemporary, jarring, and thought-provoking. Pilobolus is also about using art to build community, and while this was a performance, not a class from their institute program, I could definitely see commentaries on community within the works I saw on stage.
What did I really dig? During one piece featuring the two female dancers in all white, skin-tight attire, I enjoyed seeing the women do lifts and turns and carries typically associated with male dancers in more traditional routines. Their strength was sensual, and for a few moments during this piece I got over the “wow” of muscular power and into the “ooh” of glimpsing something beyond the human form and all its outward talents. Likewise, the opening number featured about a dozen yellow wooden chairs as props which were, at times, used  really creatively. “Really creatively” doesn’t do it justice, of course, so here’s a snippet that’s worth your 1 minute and 15 seconds:

What did I dislike? Well, as fun as the chairs were, I felt that the piece overall lacked a narrative structure I could cling to
and seemed for long stretches of time to be outwardly obtuse for the
sake of…well…obtuseness. The number with the dancers on a glass tabletop that projected their image onto a vertical screen was “cute” in the way that an idea can be clever or interesting to try in this age of technology, but once the cuteness wore off, I didn’t find the work particularly moving. The gimick called attention to itself again and again. What the dancers did was nothing short of amazing, but in terms of emotion or social commentary or even a bit of “big picture” thinking, I felt the piece came up short.
To put it directly, the choreography of these dances constantly called attention to the dancers–their bodies, their power, their abilities–which is kind of like a writer writing a novel that constantly calls attention to the words she chooses. In the end, it’s not the individual dancer or the single word that you want people to remember–it’s the bigger picture, the overall impact, the why or so what of something.
Maybe a writer unversed in dance-speak shouldn’t be reviewing dance. That said, dancers don’t just dance for other dancers just as writers don’t only write for other writers. There has to be some measure of accessibility no matter what medium you prefer. While the Pilobolus performance at Interlochen struck a chord with me for moments here and there, overall I left feeling like something was missing.