0
2
A few nights ago, I got to celebrate my friends’ upcoming marriage by floating on a pontoon boat across Green Lake. It must have been after 10:30pm by the time we moved the party onto the boat, beach bags and beverages in tow. But with sunset occurring so late on this very northwestern edge of the eastern time zone, an orange swell of light was still evident along the horizon as we set out.
Eventually full darkness settled, the Milky Way ribboned across the sky, and countless pinpricks of light announced themselves overhead. For long moments, it seemed enough just to sit back on the boat and gaze, here and there joining friends for bursts of song and dance a la Lauryn Hill, Marvin Gaye, TLC, Boyz II Men, and more. Then, a tiny thought entered my mind–I can’t remember the last time I was on a boat at night–and just as soon as the thought appeared, so too came the memory. 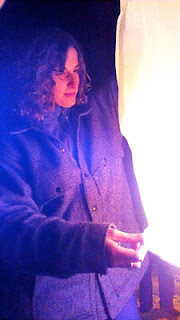 Seven months ago to the day, I celebrated my birthday on a tugboat with new-found friends who opened their lives and hearts to me in a way that felt like forever. I’d like to tell you when I look back on that time, I smile. Sometimes, I do. But the truth is that seven months ago to the day was more than just my birthday. It was the beginning of a sea change for me on so many levels. The woman who made the birthday wish in this photo isn’t alive anymore. She died right there on that boat a few weeks later and she kept dying over and over again throughout this spring. Sound melodramatic? For every blog post written, there are ten I do not write. Suffice it to say that Alaska–my greatest muse, my heart’s content, the container of all my fear and love and everything in between–ate me alive last winter. By circumstance, I learned that even though my “three years on the road” has been about writing, there is something else I want just as badly–companionship, a lifelong partner. My winter in Alaska also taught me that true love has no agenda. If it wants anything, it wants the object of its desire to be true to itself, even at the exclusion of others. It taught me that no matter how right I think I am, the universe often has something else in store for me. And finally, it showed me what I had given up (community, partnership, emotional stability) in exchange for life on the road.
That’s a lot for one woman, flying solo for 27 months (at that point), 5,000 miles away from home in the middle of a night that isn’t getting any lighter because it’s winter. In Alaska. On a boat. With the dark sky and darker sea deepening all around you. And despite it all, I would have stayed in that frigid, glorious, friend-filled, frantic, free, Last Frontier State. I would have given up frequent visits with my own family, the close community I have in Western North Carolina, the career opportunities afforded in more accessible locations (i.e. the lower 48), my dog, my Airstream, and ultimately myself.
The further I get from that boat, that birthday, those whitecaps of memory and crisscrossed neurons of sorrow and regret and confusion and love and death and all the washed up mess of something I wanted so badly, I’m so glad I didn’t.
Seven months later on a pontoon boat, the stars of the far north twinkling overhead, I dropped my skirt and shirt and jumped into the lake. Splash! It felt as warm as bathwater, as clean as cotton, as welcoming as true love ought to feel–light, real, an embrace. In Alaska, they like to tell you, “Ten minutes in the drink and you’re dead.” Maybe in Michigan they’d say the same if it were wintertime. But it isn’t. Something in me has defrosted. Here, on that night, ten minutes in the drink and I felt alive.
There’s still a Little Dead Me out there, wandering around Alaska. Someday I’ll go back and find her, tell her it’s ok and that she couldn’t have helped things turning out the way they did. For now, I’ll take forward motion whenever I can get it, even if it means getting a little wet.
Showing 2 comments