0
4
Three weeks in and I can officially say that Airstream living is enjoyable, but it’s also continuously full of hard work, improvements, problem-solving, and small victories. Getting the trailer towed into place meant I could officially unpack and move in, but it also meant covering up all the mud and ruts with straw, installing solar lights and locust poles for a path, and paying for gravel delivery. Next, I’ll need to spread the gravel and scatter grass seed. 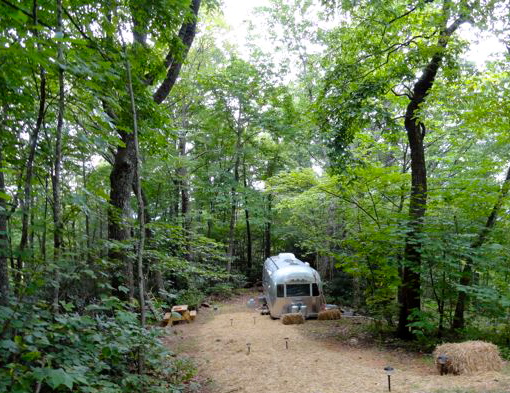 Likewise, getting the public health department to test the water (thumbs up!) meant I could use the 50 gallon tank that’s installed under the bellyskin of the Airstream, but it also meant Dad and I had to get 300 feet of Pex piping, install proper fittings with a crimper, and run it from the outside water line of their house down through the woods, across the driveway, under the Airstream, then into the tank. Once that was done, we had to stake down the Pex and cut out the section that crosses the road, attaching fixtures to make it quick release so we can still use the driveway. 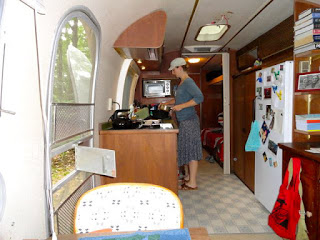 Once we got the straw down and the path lit, the big rains came, which forced immediate attention to two small roof leaks. A little spray caulking around a skylight and the bathroom fan solved that, but meantime the gas lines to the stove that we got working this winter mysteriously decided to quit…until Dad remembered that in the meantime we had removed the gas furnace and, inadvertantly along with it, the stop valve. Now, when I tried to cook something, gas came straight into the kitchen and didn’t light on the stove. One trip to town and a valve later, and we were back in business–safe, secure, and heating water for coffee in no time. Oh, and while we were at it I decided I’d better purchase a fire extinguisher, a picnic table, a new comforter, pot holders, and about $400 worth of other living items including eco-friendly cleaners since the Airstream is on a graywater system that drains out over the north side of Coon Ridge.
Meantime my body is adjusting to a single-sized bed that’s 6’2″ (I am 5’10”), a pantry that requires squatting to reach for plates (but don’t stab your eyes on the towel hooks at eye-level on your way down), a closet with a magnetic latch that snags on the tender inside of my left triceps (if I change clothes in the bathroom in the wrong position), a slight downhill tilt and buoyancy to the entire Airstream that gives it a bit of a feel of a boat when I get up each morning (there’s a reason they call it a “land yacht”), and a kitchen table just high enough to tuck in and away for the full-sized guest bed to open up (but also just low enough to pinch the tops of my thighs if I move too quickly). It’s not a complaint, it’s an adjustment, and so far I find the nuances of Airstream living educational, quirky, and entertaining. 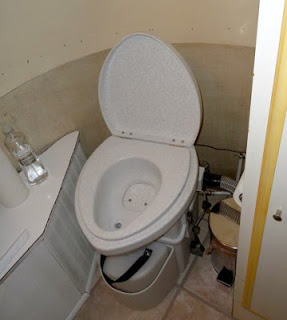 Now that the rains have eased up and the edge of fall teases the morning air, Dad and I will be able to pick up speed again after taking last week (sort of) off. Should we start with the shower rod and curtain installation followed by caulking the bathroom trim and linoleum? Or should we tackle replacing two windows, installing a third, and re-sealing all of them? First things first: I’ve been here long enough that it’s time to empty the liquid waste bin of my new, incredible, COMPLETELY ODORLESS, waterless mariner’s composting toilet called Nature’s Head. This thing is an all-in-one, folks, meaning what you see in this photo is the entire set up–no holes in the trailer, no tanks, no chemicals–just a little peat moss in the solid waste bin, a little rotating of the spider handle after each use, and a simple vinegar-water spray now and again and this thing is completely eco-friendly, safe, clean, and simple. In about four months, I’ll even have composted soil suitable for landscaping and I will have saved over 900 gallons of water.
Meantime, here are a few more pics of the inside of the Airstream:
Shots of the kitchen, bathroom, and hopefully soon a patio/mudroom will be forthcoming. Meantime, back to work!