Airstream Living: More Work to Do 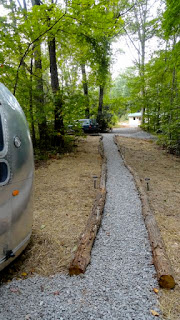 A few hours here, a few hours there. Another big push on the weekend. Finally, all the gravel is spread, the locust trees are cut and hauled to line the walkway, the lime/grass seed/straw are scattered, and the waterbar trenches dug. Half the molding and caulking in the bathroom are finished and we’re one step away (just need the right drill bit) from installing the curtain rod so the bathroom is shower-ready. At the last minute we decided on an underground waterline, which meant hiring out for a ditch-digger that cost a pretty penny. The tradeoff was worth it though–now I can get water directly from the house with better pressure, without the risk of freezing pipes, and without worrying about how low the tank is before hopping into the shower. Meantime, my parents’ cable and phone lines got cut during digging and their driveway is pretty torn up from the whole ordeal–add spreading more gravel and filling more holes back onto the list. 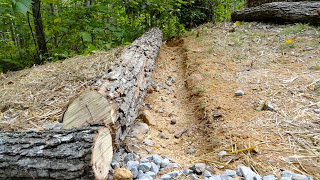 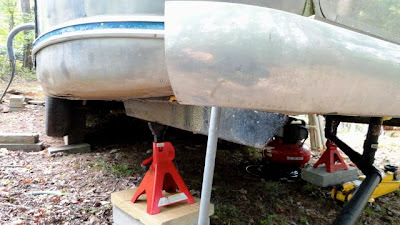 Here’s the back end of the Airstream, which is a little less glamorous but worth looking at. This offers a glimpse of the blocking and jack stands that Dad got the trailer up onto and leveled. The black pipe moving from the right side of the frame down to the left is the graywater line. The gray electric chord coming out the left side of the trailer is my main power hook up, which runs about 150 feet through the woods to the power box. We still need to feed that through some protective PVC and seal it so critters aren’t tempted to nest in there. Just behind the electric line is the air ventilation pipe that comes out the rear side of the trailer and hooks into the solid waste base of the Nature’s Head composting toilet in the bathroom. Properly aerating the system helps with faster decomposition, though it isn’t always required for this model of toilet. Finally, the metal rod running down the middle of the photo is the lightning rod which Dad and my sweetie hammered six feet deep into the earth as a ground in case of electrical storm. Yes, I am living inside a giant metal box. Yes, it would be quite dangerous in a storm now that the tires aren’t touching the ground. And yes, it doesn’t hurt to have this lightning rod in place, just in case.
We still need to replace three windows and re-do the seals on all the others. Then come installing curtains on 3 of the windows (which are being hand silk-screened by artist Dana Fehsenfeld). Come winter, I’ll place stiff foam board between the windows and the curtains if additional insulation is needed. We also have to fix a few more shelves on the inside of the Airstream and hang another towel rack, plus finishing the rest of the bathroom. The furnace isn’t installed (or purchased) but at least the gas burners are up and running. Slow and steady, the list is getting shorter. We’ll take a break this winter and move into larger/additional space-related projects come springtime. 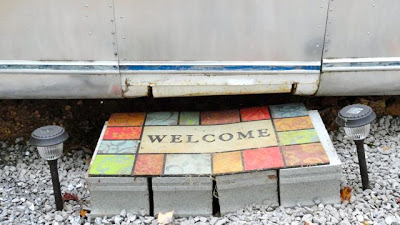 Meantime, solar lights line my walkway (I promise to get a nighttime shot of the Airstream all lit up pretty soon–it’s quite inspiring) and a welcome mat greets all those who visit. Who has visited? Hardly anyone, just yet. But one month after being home and this weekend I was finally able to exhale. The idea of inviting someone over sounds pretty great about now. But I’ll admit, it doesn’t sound as great as a day all to myself in the Airstream, pages and pages to read, and pages more to write. As soon as I can get to that day, I’ll really feel like I’ve come home.