0
2
This
is the final post in series about the long process of finding my way to
a first book contract. To learn about just how many presses, how many
agents, how many months and weeks and contract amendments, check out
parts 1, 2, 3, 4(a), and 4(b).

I
left things hanging and so did my publisher when I blogged a month ago
about the contract amendments that were going to be necessary in order
for me to sign in good conscience. I’m delighted to report that, with
the help of my agent, our contract amendments were accepted and today I actually signed
my book contract and mailed it to the publisher, certified first class.
Which means, of course, I can spill the details of this small and
humble venture, thought it feels rather large to a little pea like me.
Here’s the proof: 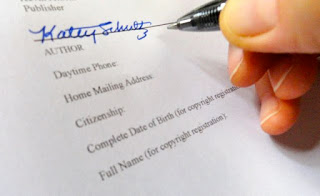 And here’s the press:
Flashes of War
by Katey Schultz

will be released May 1, 2013
published by Apprentice House
the press of Loyola University Maryland
It’s
a unique university press that publishes up to 8 titles a year through
its Book Publishing major in conjunction with the students at Loyola
University. I’ll admit–when I first heard that a student-connected
press wanted the book, I felt hesitant. But the more I read about what
they do, and the more I thought about the bonus of having a university
press back my book, the easier the decision was to make. Now that the
moment has finally arrived, I’m totally psyched–the department has
already invited me to their Spring Launch for the 2013 authors and I’ll
likely get to “meet” some of the students designing my book cover via
Skype. If for some reason all that’s not enough, just this week 2 more
stories from the collection were accepted for publication in literary
magazines (in advance of the book’s release) and my copyeditor–also
the author of 5 books and frequent contributor to national
magazines–emailed me and said: “Really great stuff. I just have to say
it. You’re the real deal!”
The real deal. Once I get that book in my hands I’ll believe it myself!
Showing 2 comments