A Celebration of Teen Writers

0
0
This week my dear Intermediate Creative Writing Majors will don their required performance attire (blue knickers, red socks) and publicly read their hard-earned poems and stories. Even though I’ve seen and heard every word of their chosen writings before the actual reading, I am still very moved by their bravery when the final moment arrives. Imagine being in your most awkward teen years, attending one of the most prestigious arts camps in the world, and taking that first brave breath at the podium in front of 50-100 other artists. No pressure, right? The event could only be thrilling and challenging, memorable and all-too-fast…all at once.

I can’t fairly publish the work of my students on this blog, because it is not mine to bring to the World Wide Web. But I can offer a few inspiring excerpts from their drafts. Also, these smiling faces the night of their reading: 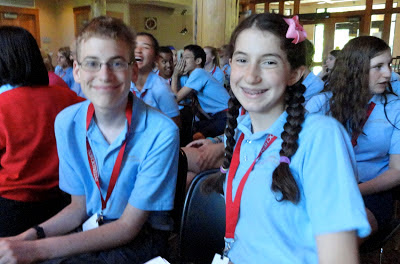 “Here is a teenage girl accepting her first beer from a friend. The skittish girl is fifteen years old, with long, blonde hair and chipped nail polish. Her trembling hands cradle the bottle as if it is a wild beast…”

“Running down the hill
wind on my back,
dirt on my feet.
The sound of birds chirping
and the water humming…”


“It wasn’t always like this. The sky had not always been gray. The beach had once been a place where people would go for vacation. They would swim in the clear blue water that reflected the bright yellow sun. They laid in the sand, waiting for their skin to darken. At the time, all of this was possible. The water was not toxic. The rays of the sun did not give you cancer…”


“The ants marched.
Warriors.
They acted as a battalion
fighting in a spectacle of grandeur
as they locked in combat.”

“I tried to imagine Aunt Judy as an angel looking down at us from a special place in heaven…but then I started wondering if it hurt when she died and I remembered this book. It said that after death, your brain functions for seven minutes. And Einstein said time is all relative. So seven minutes could be stretched into crazy time. What did my Aunt Judy think about?”


“Tyler’s significant other came to him at this time. The one who would make everything perfect. The one who had melted into the background of the party so as not to be seen, and the one who everyone thought was just another friend. Just another brother. The one who Tyler loved more than anyone else. The one who was also a boy.”

“I’d usually hate to ask you,
But would you meet me by the lake?
You can take a chance on me,
Or say ‘Yes’ if you believe in fate.
We could watch the night sky,
Maybe count the shooting stars.
Listen to your favorite music
or hear the breathing cars.”