Going Solo: The Next Day

0
0
After the epic night on the ridgetop, I was ready to get up and get going as soon as sunrise came. I enjoyed a leisurely breakfast as pale, yellow light warmed my camp and flushed the birds from their roosts. I marveled at tiny flocks of chicadee and titmouse as they flew in bursts from the western slope toward the east, flitting in the sunlight. They made sumitting look so easy–just a few flaps of their wings and they were up and over, then angling down beak-first and apparently delighting in this all the while.

Some time passed and I headed down the mountain for View Rock, about 1 1/2 miles from Deep Gap (or 2 1/2 miles from the Colbert Creek Trailhead down in the valley). I knew my hiking buddy Randy was going to meet me at the rock sometime around noon, but of course I didn’t know what time it was. Suffice it to say I had plenty of time to myself up on View Rock, overlooking the South Toe River Valley and entertaining myself by identifying known landmarks–the nursery on White Oak, the Celo Soccer Field, Bob’s studio, etc. I even read a few chapters of Olive Kitteridge, fired up my MSR Pocketrocket for an indulgent second cup of coffee, and took a brief nap in the sun. Sitting and doing nothing–or doing whatever my mind fancied in the moment–on a rock in the middle of the National Forest is not something that I do enough. I felt glad for the time, and when Randy arrived he offered a chocolate bar and freshly dug carrots from his garden. We enjoyed a nice lunch.

Our task was quite simple: bushwhack down to the Locust Creek grade (an old but well-tended Forest Service road that is now closed off, thanks to locked gates and a bit of local controversy). What I felt uncertain about, and the reason I asked Randy to come along, was where to leap off the known Colbert Creek Trail and into the unknown space between
Colbert and Locust Ridges. I knew of one trail a few hundred feet higher in elevation that View Rock and had even scouted it on my way down. But I wasn’t sure how rough it would get. The other route was one Randy felt more confident of, and since I was wearing a full pack, he suggested we try that one–more likely to be wider/clearer and less likely for me to get snagged. We dropped a few hundred feet down the trail from View Rock and, at a certain tree and clearing of the land (and a sort of wind-tunnel clearing of leaves), Randy knew we had to make our turn. I could find the spot again if I tried, I know that much, but I don’t think I could tell someone else how to find it on their own.

We stepped gingerly at first, then faster as the mountain dropped away from our feet and leaves piled around us, all the way to mid-calf. At times, bushwhacking down this section felt like skiing on top of leaves. More than once, each of us “fell” down–just simply stepping, then sliding, then giving in to the slide and sitting down on our butts to stop, get up, and start again. How long did this go on for–five minutes? Twenty minutes? I didn’t know. I should have taken note. But it wasn’t long and we dropped out onto the Locust road like it was nothing. 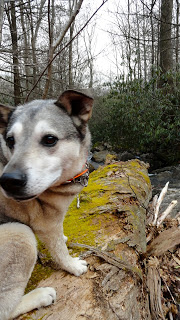 For a mile and a half we followed it, contouring Colbert Ridge, hopping over Locust Creek and contouring Locust Ridge, and then…before I knew it…I spotted a tree that I had seen before. It was this tree, in this photograph of Gus, that I took last May. This crosses White Oak Creek at the supposed “end” of the supposed “marked” and “official” White Oak Trail. We were coming in at a perpendicular and as soon as I saw the tree I knew precisely where we were–and how to get home efficiently. We crossed the creek, ignored the official trail, and continued on our merry way along the countour–not dipping down and not scrambling up. Slow and steady, over and over and over. Sideways was the name of the game and that’s what kept us on track. Until…

We hit the big outcropping of rocks on Burnt Mountain. This is actually just a ridge–Burnt Ridge, as I prefer to call it, but the map calls it a mountain–and it runs like a long finger off the ridgeline of the Blacks, parallel to Locust and Colbert Ridges, until it fades out into the lower elevations of the valley. I’d been to this rock outrcop before and dropped below it, steep and iffy with a full pack but still do-able. Instead, Randy suggested we backtrack a bit to that old 4-wheeler trail just a hundred yards away. “What 4-wheeler trail?” I asked. Randy smiled. He’d seen it and I hadn’t. He’s good like that. He’s also had over 40 years to hike and know these mountains.

Backtrack we did, then followed the 4-wheeler trail down and around the rest of Burnt Mountain until we seemed to hit some other sort of old cleared thing. What was this? Expanded game trail? Old logging road? Old 4-wheeler track? In any case, it was certainly something and when we got to the junction, Randy turned right and I turned left. We both stopped in our tracks. “Wait…why?” We both had our reasons for wanting to go opposite directions. Turning left, or north, was my preference as I knew I was headed toward a route I’d bushwhacked before and I knew it ended up on the opposite side of Shuford Creek–my home. Turning right, or south, Randy knew he’d hit an old road that ended up above Janie’s yard–my neighbor, albeit on the opposite side of Shuford Creek.

I was curious about his route and followed suite, both of us whacking through the brush and bramble as we angled southeast. After fifteen minutes or so, though, we’d lost something and we’d also not ended up where Randy thought we might. The afternoon was growing longer and, while we had a relatively good understanding of where we were, we also didn’t know how long it would take (and how many circles we’d turn) to find that old road Randy knew hooked up to the trails behind Janie’s house. We decided to head back to the juncture, if we could find it, and go my way–north. Within twenty minutes, we’d crossed Shuford Creek and linked up with the official Woody Ridge Trail. Ten minutes after that, I was home.