Going Solo: Big Agnes, Granite Gear, & MSR Get Me Through

Look, everyone! I’m practicing taking time off, like a normal person! From 2pm Sunday to about 4pm Monday, I hustled up the Colbert Creek Trail in the Black Mountains (my backyard) and spent the night on the ridgetop of the highest mountains in the East. This is the view of sunrise from Deep Gap. After a leisurely breakfast, I headed down the trail and eventually off the trail for an adventure bushwacking my way home via a new route. Twenty-six hours off. (Lest my readers think that a book tour was time off, see the previous 3 blog posts for details. Book touring, for all its glory and as good as it looks on Facebook, is a helluva lotta work.)

The impetus for the overnighter was to test my new ultra-light gear. I set my tent up on a completely exposed ridge where the wind whips short grasses into a fury as it pours east and west over the Black Mountains. Breaking all the rules in my own book, I wanted to test the limits of my gear. It was 25 degrees down in the valley, which meant it was about 17 degrees at Deep Gap. With wind gusts up to 40 mph, I’m confident saying that wind chill had me experiencing single digit temperatures last night, perhaps for long stretches at a time. My Big Agnes Flycreek 2 held up beautifully in the wind. It’s design is so smart and sleek, so durable and light…and with every extra stake in, every extra hook latched, and every extra rope tied off, I’m happy to report that the tent withstood every moment of that very long night in high winds without a moment of failure or, even, apparent stress on any of the seams or poles.

The bag was another matter…but let me be clear: it did the job it claimed it would do. I used my new Big Agnes Juniper down bag rated to 25 degrees
and added a bag liner that gives me 15 degrees more warmth, bringing the bag to something suitable for 10 degrees. But in 17 degrees…and 40mph wind gusts…let’s just say I asked for it. There were, indeed, plenty of large rocks to set up camp behind, but I wanted to see what the new gear could do and I felt relatively safe since I know these mountains well. At any rate, I got through the night and even managed to sleep, but there were some chilly moments. In the early hours of pre-dawn when the wind had finally let up and the temperature was perhaps 17 to 25 degrees from 2-5am, the bag and liner did feel quite toasty. Did I mention this bag is only 2 pounds 7 ounces and packs to something the size of my calf?

The other part of the Gear Test 2013, which I might as well go ahead and call it, was enjoying my new Granite Gear Nimbus Meridian Ki. My god, why did Granite Gear discontinue this pack (letting me get it for the delightful price of just $163!)? They’ve got similar models still out there, but man do I love this pack. It’s lightweight, strong as steel, and comes with a custom fit as hikers can order shoulder, chest, and hip straps as per their individual measurements. After backpacking for 11 years with an REI Valhalla that has enough padding for a small bed, I had my doubts that an ultra light pack could possibly be as comfortable. But it was…and not only that, it was so tight and fitted that it didn’t jerk around and throw me off center, nor did it feel bulky when I bushwacked through the rough patches on my way back down the mountain. I’m completely sold!

The final hoorah of Gear Test came when I had to light my new, shamefully lightweight and simple, MSR Pocket Rocket, which I got on sale at REI for a whopping $25. Good god…if ever there were a backpacking stove to buy, especially for you solo hikers out there like me, this is the one. (For group trips, I always bring my Whisper Lite instead.) The Pocket Rocket lives up to its name. And while I couldn’t light it on the ridgetop in 40 mph gusts, who would want to do that? I ducked off the ridgeline and behind a comfy boulder, enjoying my homemade bison chili and Stash Vanilla Decaf Chai tea in relative warmth…and with total fuel and stove efficiency, to boot.

The evening was full of adventures in gear…and the next morning would bring adventures off the trail. Stay tuned…meantime, here’s sunrise from the other direction across Deep Gap–looking west. 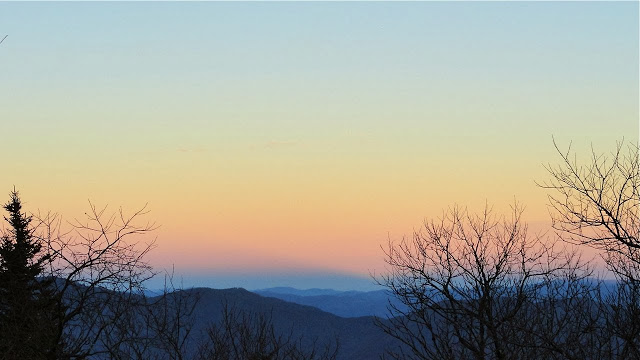