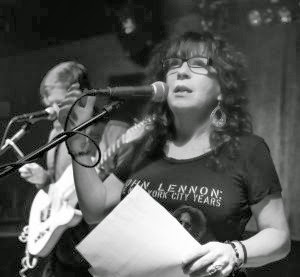 Why am I being interviewed from North Carolina by someone (currently) in New Jersey who is a known Alaska radio personality? Other than the fact that I’ll be touring in Alaska this March, in short:

“Camille Conte is partnered with the UK company, Wavestreaming, pioneers in
online radio technology since 2004, for her stream
hosting and radio
services provider. Wavestreaming has recently partnered with AOL,
leaders in internet radio and long time music company, Sony. Born in the Bronx, Camille grew up in the great state of New Jersey and
is a self proclaimed, happily obsessed Bruce Springsteen fan. She loves
the Jersey shore, mountain biking, time with family and friends, dinner
parties, live music, great conversation and poetry. Camille, a.k.a.. ‘CC’ is a multi-award winning radio personality.
Her most prestigious accomplishment, after only two years on the air in The Last Frontier,
was winning the 1991 National Association of Broadcaster’s Marconi Award
for Personality of the Year, Medium Market. At the time, Camille was
only the second woman to ever win the national award and remains the
only Alaskan radio personality to be acknowledged by the NAB.“


While I’m very much focused on the novel these days, Flashes of War still has a bit more promo work to go and in a month I’ll be taking off for another run of tour dates. Starting with the AWP Conference in Seattle (where I’m an attendee, and very excited to hear some of my mentors speak and present)…then 49 Alaska Writing Center is sponsoring my trip to The Last Frontier so that I can speak and teach in Anchorage, in addition to events in Homer, Girdwood, and Palmer. After that I’ll be in Chicago to read at W&CF, then speak at Story Week, then at South Dakota State University to speak at Great Plains Writers Conference. Details and links are on the left sidebar. This will be the dead of winter in some pretty small towns, so if you know folks in these areas, I’d be delighted if you spread the word!