Revising the Novel: Ruts and Subzeros

0
0
So…I took a week off the blog. So…I’ve been pondering the same problem with Chapter 7 for 10 days. So…the pipes have frozen, the shower’s broken, and more weather is on the way. What does it mean? It means I’ve got cabin fever. It also means I’m talking myself into a state that is far from productive. I’ve still risen early each day to do my work and I’ve still devoted 5 mornings out of 7 to the novel. But I’m not always writing…in fact, I did very little of that this week, although I read several hundreds of pages in those wee hours of the morning as the wind ripped down Winter Star peak and into the valley. The reading I did was what I call “studying” because I’m frantically trying to teach myself how to write a novel. Reading and critiquing someone else’s is one thing; writing it for myself is entirely another.

The creative bursts I experienced last winter and the summer prior–all working with the initial first draft of the novel–were hard work, but they were joyful, too. That was my creative imagination at play. Now, I’m in Bambi-land as I try using my technical imagination
and feel a bit like a fawn stumbling through first steps. I’ve got a lot to learn. I don’t think in terms of beats and progressions, protagonists and antagonists, three acts or hero’s journeys. And I don’t have to, at least not forever…but I’m certainly at the point in my drafting where I need to be able to name the things that I’m doing and not doing on the page. If I can name what’s working and what isn’t, then I can start to look for a solution. As they say, “Knowing is half the battle.” 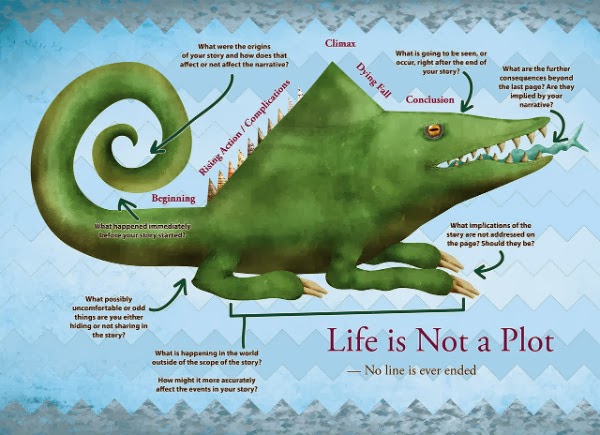 The other half of the battle, or some fraction thereof, has to do with routines and refilling the well. I’ve always been good with discipline. And even though I’m constantly shifting between my house or my sweetie’s house, I still manage to keep my routine relatively well. What’s shifted, I think, is the depth of my focus. I’m not able to go deep enough, quick enough. Part of that is because I’m adjusting to sharing my life with someone after being alone for four very highly-productive years. But the other part is that I keep telling myself I don’t know how to write a novel. I keep remembering that I didn’t study this in grad school (my degree is actually in creative nonfiction). In other words, I keep psyching myself out.

Last night, I got sick of that feeling. I took out Wonderbook (see above photo), which I’ve been reading several pages of each morning, and started at the beginning. Thumbing through my highlights, I did what I did to get through undergrad: I took notes. Recopying important or inspiring information has always been an necessary step in the learning process for me. Somehow, I had forgotten this. In the process of copying pertinent quotes, I learned how I’ve been getting in my own way. I don’t have to write only early in the mornings. I don’t have to read the New York Times, then a novel I’m studying, then Wonderbook, then my current chapter in the novel. All that’s just preamble. Just because it worked before as a warm-up drill for my creative juices, doesn’t mean it will work every time. Even further, maybe I know more than I think I do. I don’t have all the technical terms for things and I’m not a pro, but I’m dedicated to what I do. That will take me far…and can take me even farther, if I let it.

For context, here are a few quotes from Wonderbook that are helping me take a more upbeat approach:

“Expectations put the wrong kind of voices in our heads. The voices of ambition say, ‘Let’s try to be great.’ The voices of expectation say, ‘You must be great. Or else you are nothing.’…Also, my single favorite piece of writing advice: ‘Forget about grammar and think about potatoes.'”

“Your imagination thrives best when you live in the moment…Being distracted from your environment is a direct hindrance to your imagination–it blocks receptivity, it redirects passion, and it ultimately channels your curiosity down well-worn and uninteresting paths.”

“Discipline balances the imagination by grounding the writer in pragmatism and structure. Discipline is learning craft, practicing craft, and on the micro level, isolating the partiuclar problems you need your imagination to solve.”

“So the question is: How can you position yourself to dream well?“