0
0
It’s been a while since my last Airstream update but that doesn’t mean the home improvements have stopped. It’s come a long way since that first video tour! Here’s a recap:

Leaks
Dad and I have resolved the minor leaks issue down to, well, just one or two stubborn ones. They’re small and unpredictable–drops or a narrow stream, only in certain wind and angles of downpour. A few drops never hurt anyone, but when those drops happen to fall right over my library…well, you can guess how this here writer feels about that. If anyone knows of some miracle sealant, do comment.

Polar Vortex Recovery
Yep. I lost the mixing valve in the shower during the first polar vortex. An $85 part and far less damaging that what I had envisioned that first go round when the pipes froze–terrified the ice had reached my hot water heater. Given that we had the coldest winter in 30 years and multiples nights below zero, I think the Airstream faired pretty well. Dad kicked in his smarts, skills, and time this week for the Polar Vortex Recovery by re-designing the shower/bath system so that the same problem doesn’t happen again next year.

Carpet
Did I mention I got new carpet for my living room/office/dining room? It’s glorious and really helps the space feel like its own “room.” It’s all about storage, borders, and usage when it comes to maximizing Airstream living space. The carpet is aesthetically pleasing, affordable, easy to install, and provides a great visual barrier leading up to the kitchen. 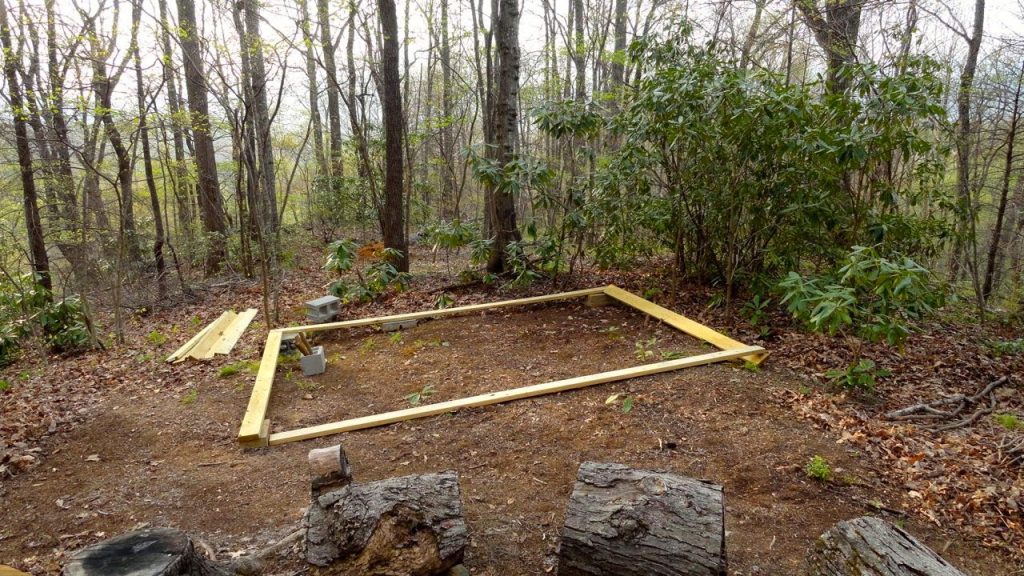 Out Back
Perhaps my favorite thing about this time of year is that my living space doubles…quadruples, even! Warmer weather means I get to eat meals on the picnic table outside, host friends outdoors around the campfire, and even tend to my “lawn.” Out back, Dad and I are building a 14’x10′ tent platform. This can be used for yoga, hosting friends, and even seasonal living space with the family-sized tent that I just ordered.

Landscaping
This is the most challenging area for me, as I’m $75 into grass seed (last season–and yes, I used straw and lime) and just can’t get much to grow. I’m going to give it another go this season and after that, may have to look at alternatives. Meantime, I’ve put in for a truckload of mulch and bark chips. The mulch will go under the Airstream where Gus the Superdog makes his summertime bed. This will keep him cooler and cleaner (not dirty or muddy, just pleasantly mulchy) and help create a little more of a vapor barrier between the ground and the belly of the Airstream. Dad did some mold prevention research and found that some folks even put tarpaper down on the grown for a heftier vapor barrier, so I may try that, then the mulch. The back chips will go along a narrow path around the campfire to the tent platform, to keep things tidy and avoid muddy spots during summer rains.

Summertime
For the first time in four years, I get to remain home during the summer. I have a few small trips, including two trips to Interlochen to teach for 1 week each time…but I’m not moving my life anywhere for three months and that feels really, really good. My sweetie is moving here for the summer, too, to cut back on our commutes and give us more time together. I hate the heat and humidity and find that I’m more sensitive to it than others due to my Pacific Northwest upbringing, but I’ll be just a hop, skip, and a jump away from the South Toe River and some darn good swimming holes. Let’s celebrate!