In His Own Words: A Veteran Listens to Flashes of War

0
2
Last month in Alaska, I had a few readings in the smaller towns around Anchorage. Little did I know that, when the dates were booked, it was the first weekend of spring break. Add crystal clear sunshine and five inches of powdery snow to that glitch and suffice it to say I had a few events that were very slimly attended. But if I’ve learned anything on book tour, it’s that no matter who comes or how many people make it to your event, you always learn something from the experience. It was my honor and privilege to meet one veteran in particular while I was there, writer and radio personality Dan Grota. Here’s what he has to say about his experience with Flashes of War at Fireside Books in Palmer, Alaska–his first time attending an author reading.

At the Bookstore on Flashes of War
by Daniel D. Grota, Retired Army, Operation Iraqi Freedom ’04 & ’05 Veteran (among many other tours)

Earlier this month I was in Fireside books for some R&R after my Thursday stint volunteering at KVRF Radio Free Palmer. I go there to unwind a spell, talking to the staff about the shared love we all have for anything about books. Dave Cheezem was there, as per usual. The tiny store was quiet as Dave came up to me bearing a book.

“You should be here this Sunday. I’m having this author here for a book reading,” he said. Dave held up a book with a dark green cover. The image of a plastic Army man toy (like those I played with as a kid) graced it. I took it, trying to hold it at arm’s length so I could read the title (my glasses were buried in my pack at the time). Once things came into focus, I could read the title print which read “Flashes of War— Short Stories by Katey Schultz.”

Dave pointed out a round, yellow label on the cover saying, “Check it out. She won the 2013 Book of the Year from the Military Writers Society of America for Literary Fiction.”
I replied, “Really Dave? Cool.”
Dave smiled saying, “I think this is right up your alley. It’s about the wars in Iraq and Afghanistan. Can you be here this Sunday to meet her?”
I mulled it over for a bit. “I don’t know Dave, I work on Sundays. When is she going to be here?”
Dave looked at me through those thick glasses of his. “About 2 o’clock. Does that work for you?” He asked.
“Sure, I get off at that time and it is only a five minute drive from work to here. So yeah, I’ll be here Sunday a little after two.” I put the book back on the shelf and headed out the door of Fireside Books waving goodbye to all. Bundled up for the cold chill of winter that was still on at the time, I headed out to my car for home.

Sunday rolled on in. A quiet day at work with little to do.Time dragged on until the appointed hour of two pm. The painter showed up at the last minute for some work inside the building. After making sure all was ok leaving her there to do her thing, I left late and in a rush for downtown Palmer. Lucky for me, there was parking right in front of the store, free. It was still quite cold outside as I got out of the car. My Army OD Green field jacket was zipped up. The darn thing is beginning to look a little on the worn side, matching the owner’s looks on wear and tear. With my Army logo hat, I looked every part of an old veteran grizzled and grey. A proud one at that too.

Once in the store, a tall young woman with long brown hair in a blue down vest greeted me with a warm smile. She was standing next to Dave along with another woman. The woman in the vest was Katey Schultz. She was talking to the other lady who was leaving before turning towards me.
“You must be Dan. Dave was hoping you would be here. He has been telling me all about you,” she said, warmly shaking my hand. I smiled and apologized for being late, while giving Dave the “What did you tell her about me?” look at the same time. Dave, trying to look innocent, could only shrug and smile. Katey went on tell me that these were a series of short stories about GI’s, their families, and some of the people in the caught up in the middle of the wars of Iraq and Afghanistan. And they were all works of fiction. “Would you like to hear a few read to you?” she asked.
Well, after all, this was a reading–my first, by the way–and I was more than intrigued at what this soft spoken lady from North Carolina could write about war. Dave and I sat down in the little alcove just off to the left of the front door of the bookstore. Katey sat across from us and began to read out loud from the first of the short stories in her book. 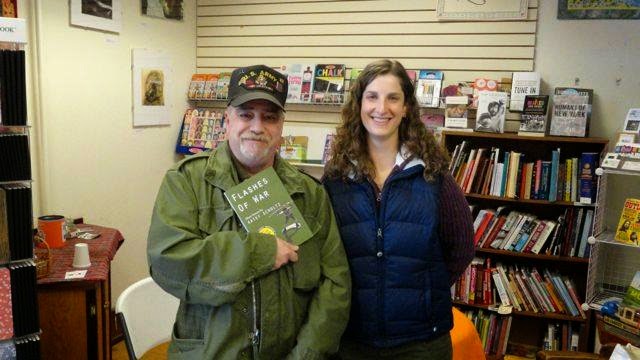 After the first story was read, I was impressed. Really impressed. She got into her characters’ heads as well as the environment of life in the war and at home after it. The characters were so real to me I asked if she interviewed GI’s for her stories. They walked and talked like most GI’s did. She said no. It was based on her research and her imagination. She went on to read a few more and I began to tell her some of my stories. Pretty soon we were swapping tales like two old soldiers telling war stories. If someone could have walked in on us they would have sworn it was all real. Except hers were works of brilliant fiction, mine born from a hard reality. No wonder her book won that award.

And it wasn’t just stories about GI’s in her work, but family members of those that served and even those natives caught in the middle of wars lighting up in their back yards. Katey wrote from the heart and a vivid yet very realistic imagination. A rare thing; a civilian who truly gets it.

At the end of reading session, I had Katey autograph a copy of her book for me. She asked for a photo of the both of us with Dave trying to work the digital camera she had. Now we have a picture of me with a goofy grin in that old field jacket holding the book in my hand and Katey standing next to me with a smile. It was later posted on all our Facebook pages for all to see. I read the book from cover to cover in short order. A good read altogether; worthy of the award it earned.
Showing 2 comments