Revising the Novel: Logistics on the Screen

0
0
Earlier in the week, I discussed the logistics of drafting the novel on paper. When it came time for my second pass-through on the work, I was screenward bound! Even though I wrote by hand, I had also been going back every few days and typing my handwritten pages into the same document in Word and saving it. After some time and space away from the work, I went back to this document and took a long, heavy breath. Time to get messy…
The second pass through kept me working with that same, original, single Word document. In retrospect, maybe that wasn’t the best choice–as a lot can be learned by retyping (and inevitably changing) lines. That said, I felt I was under pressure to produce a draft or at least a strong first fifty pages, and so I forged ahead. My revisions were mainly at the line level and dealt also with section breaks, chapter breaks, and parts of the novel. In other words, I was making large-scale structural decisions and constantly tinkering with the table of contents to keep it updated. (Again, here’s where Scrivener might have helped.) I did not question the major premises of my characters or plot at all, which was also a bummer. But you can only hold so much in your mind at once, and perhaps this is why novels take so long to write.
Then I sent out that fifty pages to a few kind folks, and those kind folks told me it wasn’t ready yet but that they really cared about the work and would truly, honestly be waiting for it when I had it more fully developed. Oh, kind folks. Thank you for existing. And I’m sorry I sent you what I did–I didn’t know what I didn’t know, you see, and therein lies every novelist’s struggle.
Much more time passed. Months and months and months and a lot of my book tour for Flashes of War, in fact. Finally, I came back around to make a third pass on the novel, and this is the process I’ve been documenting in posts this year. This time around, I did not work in the same, single document in Word. Instead, I opened the main document and then a new document, and literally typed each new word and sentence from the beginning. I did not cut and paste and I still refuse to do so. I work with both documents open side by side on my screen, like this: 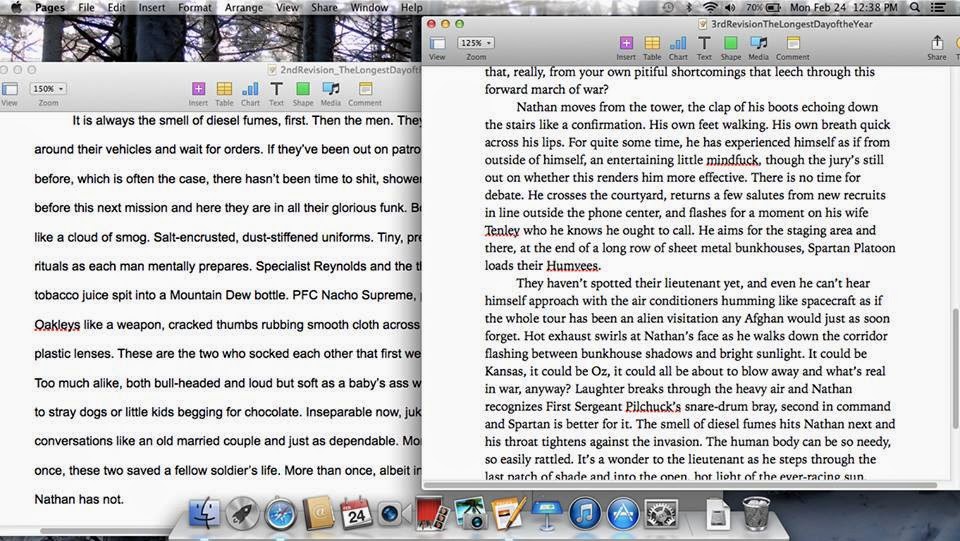 I’m going painfully slowly, working scene by scene, line by line, looking for windows and openings where before I had breezed over something. I’m thinking critically about structure on a small scale, the level of scene once again, and tearing without hesitation into later parts of the novel to bring them forward, forcing action and reaction sooner. I’m opening, I’m closing, I’m cutting, I’m adding. It’s surgical and intimate and that feels right–and for the first time in a while, it’s also exciting. Is it also hard? Hell yes. I don’t think that will ever go away.
I couldn’t be doing this without all the work I did on paper after that second pass through but before this third pass. What work? This work, and this work here.