A Writer’s Take on College Football: Marrying into #HokieNation

0
0
Five generations of my dad’s side of the family lived in South Boston, and although I visited many times over the years, I never claimed residency. Even still, this bloodline means that being a Red Sox fan is as genetically determined as clearly as my Sicilian curls and large earlobes. Although I don’t follow baseball, I do occasionally get riled about college football, so it should be no surprise that, by virtue of my recent engagement to a Virginia Tech graduate (amidst a family of fellow VT grads), I am now a Hokie fan. [Side note: When Brad and I were dating, I first met his father and father’s girlfriend, as well as his brother, sister-in-law, and nephew, against the backdrop of a Hokie football game on the big screen, a bowl of corn chips passed bewteen.] Of course, the Oregonian in me will always love the Ducks, but they’re time zones and flights out of reach right now. Meantime, what’s the harm going nuts over one of the most exciting teams to watch in the ACC? 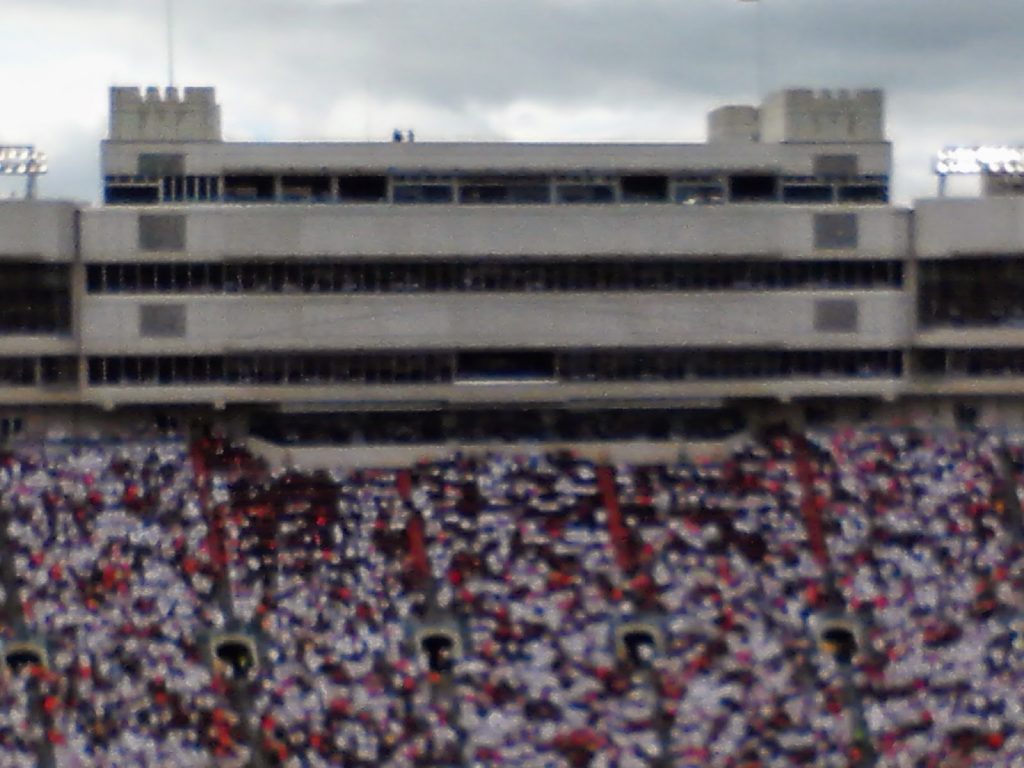 To begin my initiation, Brad took me to my first Hokie home game at Lane Stadium in Blacksburg, VA this weekend where 63,257 fans gathered to shake their keys (like gobbling), wave their arms in a triangular formation (like turkey tail feathers), and do the Hokie Pokie. When asked, “What’s a Hokie,” I already know that I’m supposed to say, “I am.” A hokie is just a nonsense word as far as I can tell (though a deeper story awaits to be told) and that word plus the team’s turkey mascot make for loads of fun fan merchandise and tradition. I watched the Hokie mascot shake his mighty tail feathers on the sidelines and crowd surf atop the VT Cadets (impressive!). Did I mention that Ducks and Turkeys are both large birds that taste good to eat? The transition has been nearly seamless, and I don’t even feel like I’m cheating on anyone.

To top off game day, it was also Military Appreciation day, and I enjoyed the special halftime show honoring each branch of the military. If I were a veteran, however, I believe I might have had a hard time relaxing in the bleachers across from the three men in black [pictured above] pulling security. From a distance, their gestures appeared much like the snipers our U.S. ground troops have been battling for 13 years…

It was a rough first quarter against Eastern Carolina University that came back to kill us in the end. Poor passes (or failures to pass) from the VT quarterback (who had been unstoppable just a week prior versus Ohio State), avoidable penalties (such as substitution screw ups), an out-of-bounds kick at kick off, and other plain old mistakes by the offense in particular accumulated throughout the next three quarters to lead to a disappointing 21-28 loss. Still, once I got over the initial vertigo, being in a crowd of that size was exhilarating. In fact, it got me thinking. What would a writer’s life be like if each time she wrote a blazing good sentence, she was cheered on by thousands much like this:

I’m going to take my cues from the Hokie fans, since now I’m one of them, and start getting a little wild at the desk. Why not stand up and shout? Why not shake my tail feathers all about? Why not start keeping track of word counts like game scores, chapters completed like touchdowns, revisions sent to an editor like a bowl game? If the metaphor fits…use it!