0
0
One of the great things about being engaged is that, all of the sudden, I have a big family! Coming from a tiny clan of 2 parents and 1 little me, the idea of multiples still baffles me. When Brad’s family wants to go out to eat, they have to call ahead and make reservations–table for 9 or maybe 11 if my folks come, too. That’s still small for some people, I realize, but it’s over 300% bigger than what I’m used to. I love it.

Of all the family, there’s one grandchild, a curious, outgoing, energetic 6-year-old that I get to call my nephew. My uncles and aunts were awesome when I was growing up and I take inspiration from their investment in my life. Even though we lived 3,000 miles apart, they remembered special days and, most of all, were really “on” and interested whenever I flew across the country or my parents and I made a trip for holidays. For my nephew E, I’m trying to get a sense for the pieces that make up his world–karate, school, cub scouts, football. In first grade, liking your teacher and finding friends are big deals. I figured it was time to see what they were all about…

On Wednesday, I got to travel with my sister-in-law and my nephew E’s 1st grade class to the historic Barter Theatre in downtown Abingdon, Virginia for a production of “Jingle All the Way.” My first thought is that I can only describe a theatre full of several hundred 6-year-olds as LOUD. But in truth, their sounds guided my ears toward gems of conversation. Gentle, high voices competed with each other with exuberant exclamations: “Look at that big box. That biggest red one, right there in the middle!” and “Did you see the elves? Do you think they have candy?” and “I have to pee!” rang like a Christmas Carol as we waited for the musical to begin. 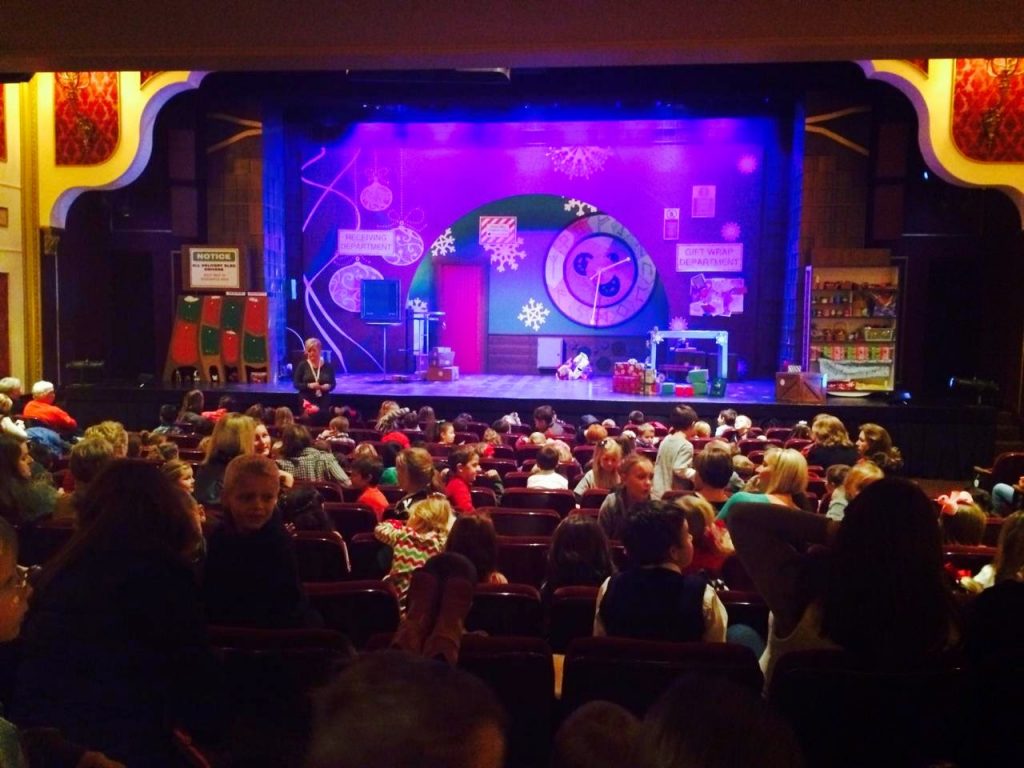 I’m no theatre buff, but I do know narrative and I love a good tune–so let me just say that in less than an hour, this production delivered balanced doses of humor, action, hyperbole, cheer, and that good ol’ holiday spirit (which includes a requisite dose of cheese). In a small town, in a small theatre, you might expect that one of the actors or actresses would be the “weak spot.” Or perhaps, that at least someone would sing slightly flat or sharp. But through and through, this cast of six stayed in step. They were not just pleasantly in tune, they were marvelously musical and gifted. Sparkles (Kelly Strand) and Glitzy (Annie Simpson) sang remarkably high and fast, enunciating like it was easy (which I’m sure it wasn’t). They smiled like Olympic ice skaters, grins evident from my back row seat. Santa Claus (Joseph Matthew Veale) revealed a more complex character, not just the “jolly” St. Nick we’ve come to expect. Tick Tock (Sean Michael Flattery) acted through a likewise complex set of emotions (I especially enjoyed his “flashback” to the hand injury) and played the part well. Jingle (Hope Quinn) and Jangle (Michael Vine) offered delightful duets and the kind of Broadway glee that’s hard to take your eyes off of. Notably, whether through careful direction or self-restraint, Quinn’s ability to exude an operatic pitch-perfect melodious bellow was used wisely–and by that I mean that her booming talent appeared when necessary, but did not dominate, as appropriate to the narrative and overall stage direction.

But perhaps the real show happened just outside the Barter Theatre’s doors when the audience was released to return to their school buses and minivans and SUV’s, hellbent on Chik-fil-A and hand sanitizer. Adults squeezed through the doors to the theatre in an attempt to exit toward the lobby. A human traffic jam quickly formed. The source of the hold up? A little boy with a nametag that read Charlie. As soon as he spotted the actor Santa Claus, he rushed up to him with an urgent message. His pale cheeks and chapped, pink lips made his plea appear all the more pressing as he addressed Mr. Claus with all the focus and intention he could muster. I watched as the line backed up, adults confused about why they couldn’t get out. I watched as the Elves listened over Santa’s shoulder to little Charlie, making his plea. He talked and talked, admirably unaware of the world and its schedules and lines and open doors letting cold air rush into the lobby. About mid-way through his wish list, a toddler (perhaps Charlie’s brother) waddled into Santa’s arms, pressing his face into Santa’s costume. But Santa was not distracted, nor was Charlie. The two locked eyes and the wishing continued. What could possibly be so important, I wondered? But the noise of the crowd made it impossible to hear.

Later, as buses of 1st graders pulled up to Chick-fil-A and unsuspecting adults on their lunch break soon realized the chaos that was about to descend (for my part, I had flashbacks to my public high school cafeteria, a place I prefer to forget)…I saw that little boy Charlie again. Nearby, his mother sat with other parents, eating her lunch. When I asked her what Charlie’s wish had been, she told me he asked Santa for “a remote control with 1 button on it that makes everyone in the world fly when you push it.”

On the heels of “Jingle All the Way,” which longs for “the good old days” and preaches the ills of sugar addiction, I found Charlie’s wish hopeful. (Side note: For “dessert,” a whispy-haired woman in a Chik-fil-A apron handed out peppermint candies to the children…an ironic ending given Jangle’s addition to said candy in the play we’d just seen.) Today’s youth grow up with iPods and hearing about IEDs. They’re plugged in and all the while, we’re fighting war(s). I see many adults either plugged in next to them, or scratching their heads about how to “measure” a child’s attentiveness and presence of mind in the digital age. But the imagination still runs wild. Some dreams and visions are still what they always were–the chance to fly, the chance to watch the world change one button and one little wish at a time. I jingled all the way home, plugged in the Christmas tree lights, and felt good about the world.