0
0
After four days of rain, I woke on Saturday morning to…more rain! Determined to race anyway, Brad and I piled into the car in early daylight and headed for Bays Mountain Park. The Race, sponsored by Fleet Feet in Kingsport, TN, was held in a city park that has over 39 miles of trails and a reservoir. I didn’t feel as nervous the moments before this race as I felt before my first 5K, and having Brad there as well as getting to start out with my running friend Zan really helped. Zan is 57 and has been running for many years. He’s easy-going and genuine and when I asked if he’d run a 5K and 10K with me, he agreed. We run at our own paces, of course, but something in me wanted to be accountable to another runner in the same race, and the invitation rolled off my tongue before I really even thought through this whole “running” thing. Zan was a great comfort as we stood in the soggy trail waiting for the race to start. 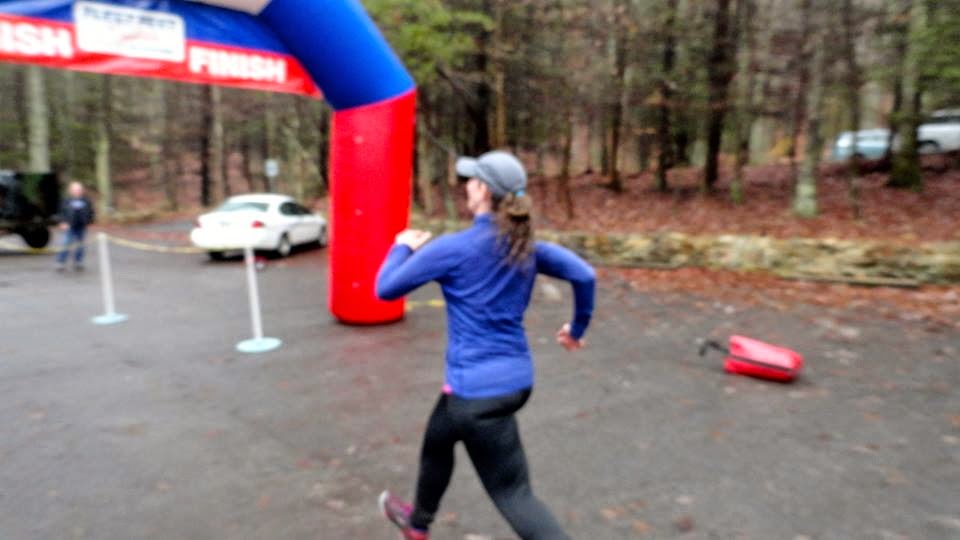 I’d like to be that funny writer who expounds in great narrative detail about the lessons learned on my first 10K race day…but the early morning start to the race two days ago got me off schedule, then the celebratory pizza and soy ice cream threw me off that night (I don’t eat much sugar, usually), then travel to Celo got me off my work schedule, and last night the full moon left me howling through fitful sleep. All the same, let’s give it a try…

It’s good to know these things, and now I do:

The running shits. Let’s talk about that for a minute, because no one else seems to be addressing it. If runner’s books are going to be as invasive and personal as to demand you evaluate your own body fat with calipers, why don’t they also have a chapter called Race Day Running Shits? I know I’m not the only person who prefers to poo before a run and, based on the 22-minute line I stood in to go to the bathroom before the race, I also know I’m not the only one who gets a little nervous on race day and has to, well…deal with that.

Bodily functions aside, I was mostly pleased with my run because I finished, didn’t fall, and had a good time. I was slightly displeased with my time, but I’m currently trying to figure out what distance I actually ran (more on that below), so I can’t fully understand that disappointment as of yet. It was cold and wet and the course was hilly and completely covered in leaves. Wet, muddy, leaves–every single inch of the ground–just covered. Around mile 4, I started craving water and an apple–the first time I’ve really had a craving on a run like that–and I spent much of mile 4 at a very slow jog with my head bent and my arms pumping as I moved slow as molasses up the hills. A thickly-muscled woman about my age in a Cross Fit shirt (she had no hips, it was really quite amazing to run behind her and watch how legs move when a person has no hips) passed me on all the uphills, and in turn I’d pass her on the flats and downhills. At one point, I came across some runners actually walking (this is more common than I realized) and the Cross Fit woman hustled past them and let loose a warrior cry through the fog. “YOU GOT THIS!” was all I could make out, but I appreciated it. Like cattle caught in a storm, we responded to her bellow and collectively picked up the pace–the walkers starting to run again and the slow uphillers like me taking slightly longer strides.

I guessed that I must be somewhere near the end of the medium paced running pack, or at the front of the slow pack. I ran much of the race with plenty of elbow room, leap-frogging with the same six or eight people. I seem to find myself around 50-something men around 5’8″ or 30-something women with bricks for muscles. I consider them good company. But during that mile 4…during that hill…something happened. I lost internal steam. I knew I’d finish and I knew I could push harder, but I just didn’t do it. Why not? I’m still not sure. Yes, my hamstrings were objecting to the steepness and the cold. Yes, I was being cautious because I didn’t want to injure myself. But where was that inner umph that I’d felt just four weeks prior when completing a test run on my own?

Then there was the distance thing, which I mulled over and over again in my head as I raced. I was running a 10K which is 6.2 miles. But there were also Half Marathoners competing that day, and they were told to run “two loops.” We all started together and ran the exact same path and finished at the exact same finish line, but the 10Kers stopped at one loop and the Half Marathoners stopped at 2 loops…See the problem? A Half Marathon is 13.1 miles, so half of that is actually 6.55 miles. Did I run long or did the Half Marathoners run short? In this business of points, qualifying, personal records, and entry fees, that’s not a discrepancy that anyone takes lightly.

In all the happiness of finishing the race, I forgot to ask officials about this on race day. I’ve emailed the race sponsor and will call Fleet Street running store later today. My time for Saturday’s Rocky Top XTERRA 10K was 1:20:45. I placed 6th in my age group and 45th overall. Official results are posted here. My personal record for a 10K is 1:07:54 and before I began training, I ran one at about 1:20:00. So you can see why I felt a little disappointed by my time…but also a little disoriented. It’s possible I ran more than 1/4 mile longer than necessary. It’s also possible my pedometer is off. I know I moved slowly in the rain, but I thought I’d do at least a little better than that. Still–I finished with a fast sprint and a smile and have the bib, t-shirt, muscle, and memory to prove it!

Onward to half marathon training…yowzah!