0
0
[Dear Readers: I’m out of the backcountry and a few hundred miles south, now in Denali–where I’ll be based for two weeks or so. Meantime, the next few days will be used for catch up posts about last week’s backpacking trip. I missed writing!] 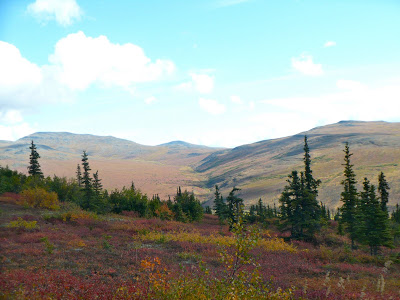 [View heading toward Moose Creek, looking across to the Nome Creek Valley]
The tundra was an array of rusted burgundy, golden yellow, crimson glow, lime lichens, and deep green spruce with blackened bark. As we ascended, the trees dropped away and the plant life quickly shrunk to alpine sizes. This far north, “alpine” doesn’t always mean “high” in elevation, it more accurately refers to climate. Reds turned to purples and gold plants were swapped for a mélange of orange-tinged miniature plant life. I only wish I owned an Alaskan field guide and had the extra room in my pack to carry it. 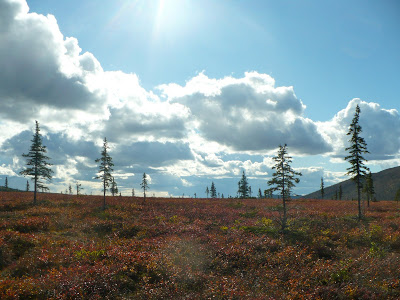 [We were blessed with an entire trip of weather like this, though the temperature dropped to freezing each night.]
I enjoy starting out on the ATV road, though I’m not sure KB prefers it. For my part, when I’m still warming up and my pack’s heavy, I don’t mind a little ease and clarity from a road, albeit a rough and steep one. We moved along at a good clip, crossing Moose Creek and contouring along the Little Champion Creek Valley. There, we left the road and would not be on any human formed trails or roads until we were at the truck five days later.
Going “off trail” or “bushwhacking” or going “into the bush” is a great feeling. In Alaska, it’s pretty much the only way to go, since 99% of the places people hike don’t have maintained trails in the fist place. Study your maps, know your directions, and be smart about every move that you make. Bushwhacking up to our first pass, we ascended a naturally stepped tundra with swaths of moraine (lichen-covered rough boulders, in this case). Rather than dropdown the other side, we camped in the sunlight at about 3300 feet. 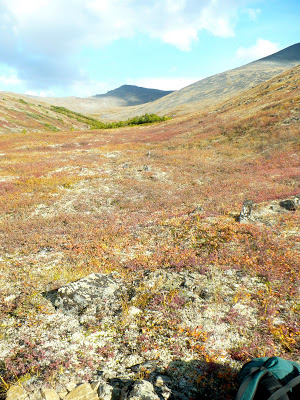 [The juncture at which we left the ATV road and started bushwhacking uphill across the tundra, toward our first pass.] 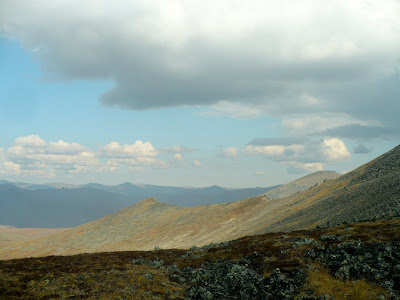 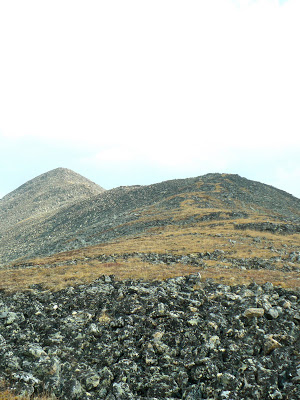 [Views from the top of that pass.]
It stayed light out until about 11pm, though who knows what time it really was, since neither one of us hikes with a watch. We’ve been losing about 5 minutes of daylight since I got here, which translated into roughly 105 minutes less light per day than when I landed in Alaska on August 12th. By the time I leave, it will be almost “normal” and not too many weeks after that, much of the state will enter the dark zone.
All in all, it was a fantastic first day once we got saddled up and moving. We hiked about 8 miles total, thanks to the ATV trail. All else ahead of us would be 1/3 the speed and 5-10times the effort until the trip’s end, according to the topo maps and the BLM Ranger.