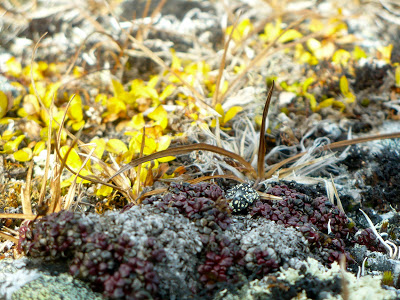 [Sample of micro-tundra vegetation]
The valleys seemed devoid of moose, caribou, and bear, but we trekked above treeline and near headwaters and great mountain cirques most of the day. That meant very little coverage for large ungulets and no fish activity for bears at the height of their preparations for winter. We did see and hear small birds, a marmot skeleton, and nearly 30 Dall sheep in 2 separate herds. From afar, they traversed the loose, rocky mountain slopes as swiftly and effortlessly as a flock of birds through air. Up close, they looked as awkward and typical as ever—boxy white rectangles set atop four fantastic, agile legs. 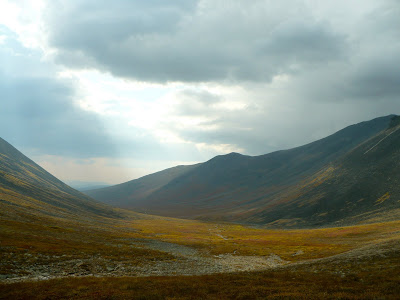 [It’s a little difficult to see, but follow the distant ridgeline starting at the left side of this photo, then stop where the sunlight shines through the clouds, just before 2 darkened, smooth-looking peaks. That’s the pass we came up and over, then hiked several miles uphill toward another pass, from which this photo was taken.] 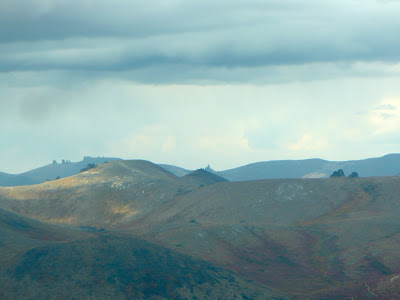 [View from the second pass, capturing the lure of the granite tors.]
In all, we only travelled about 4 miles on Day 2 of the hiking trip, though with all the back and forth that bushwhacking requires, it was more like 6 miles total. We began at 3300 feet and summited 2 passes, the highest around 4600 feet according to the map. We stayed high as much as possible, though had to drop almost 800 feet between the two passes because the terrain along the contours was impossibly steep. By mid-afternoon, we set up camp at the headwaters of American Creek, around 3800 feet, with steep slopes and rolling red tundra all around.
The White Mountains are known for “granite tors” or high prominences of exposed granite that would be the delight to many-a-rock climber if they weren’t so far into the backcountry and completely devoid of trails. As it is, only a few seem to make the trek each year. The second pass we summated brought us up close and personal with the unique formations. KB and I dropped our packs and played around in them for at least an hour, hiking on old goat or sheep trails to the outermost ledges. Later, we dozed in the sun on the tundra mosses at the top of the pass, orienting the map and marveling at the great weather. Wool hats, gloves, and down vests aside, it was gloriously comfortable and even occasionally “warm.” 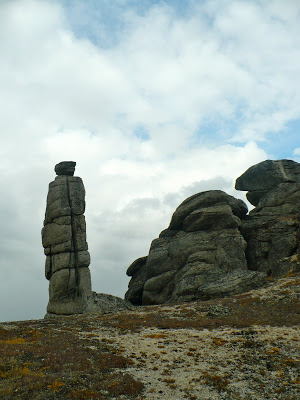 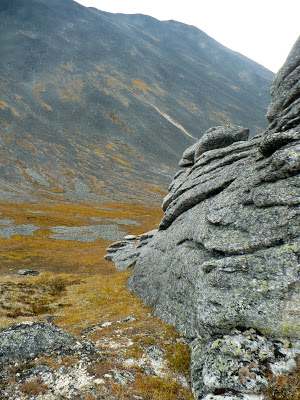 [Views of some of the famed granite tors.]
In the short days that we had for our trip, the arrangement of the ranges in this particular area allowed us to explore 3 valleys from cirque and headwaters to treeline and rushing, wide creeks. Those 3 valleys were: Little Champion Creek, American Creek, and Nome Creek Valleys with views of Champion Creek and Convert Creek Valleys as well. 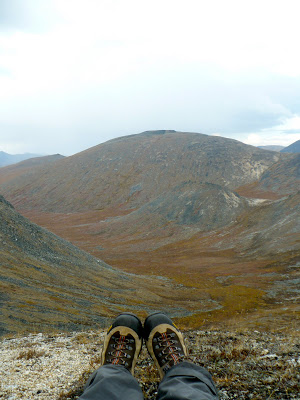