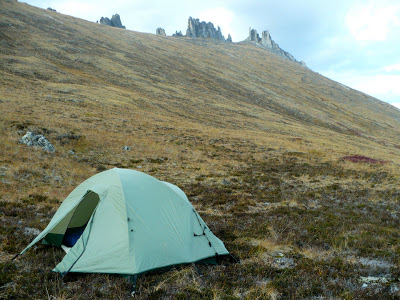 [Base camp for 2 nights at the headwaters of American Creek.]
We woke to sunlight and took notice of the Dall sheep, which had dropped boldly down into the valley from their steep, rocky overnight perches up high. I saw and heard some kind of hawk multiple times and wished again for my bird book. But most spectacular of all was setting out with light daypacks on Day 3 and ascending immediately to the granite tors lining the high ridge walls of American Creek Valley. KB and I weren’t decided on where we’d go or even how long we’d hike, and we even brought sunglasses and reading material in our packs in case we decided to laze around on the tors and soak up the view. 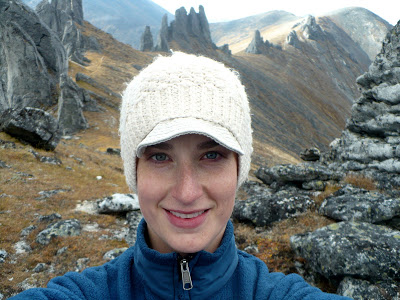 [Part of the rim we walked is behind me, with more miles ahead of me to go.]
Instead, luck and ambition were with us as we quickly picked up an old goat or sheep trail (narrow but helpful) and walked the rim for a few miles, sometimes climbing hands and feet and other times walking easily along a thin strip of mountain ridgetop made of lichen-covered granite. On a rainy day, that kind of exposure would have been torture but that day even the wind laid low and every direction we looked we had endless views. KB took most of the photos (and even a video that day), but we couldn’t find her camera data card at the trip’s end, so I have yet to get copies of those images. A few of mine will suffice for now, though. 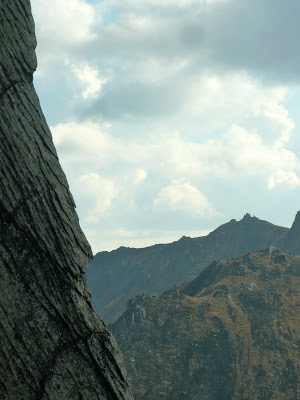 [Partial view of ridgeline from a granite tor.]
To our great surprise, when we got to the end of the ridgetop row of tors, we realized that all the while we had also been doing most of the climbing necessary to summit Mount Prindle—one of the highest peaks in this area of north country alpine tundra (5,286 feet). We loaded up on some gorp, dropped down a few hundred feet, and then climbed another mile to the top. It felt like walking on top of the spiny ridge of a gigantic animal, one with skin made of granite boulders and occasional hairy patches of alpine grass. We saw an owl pellet. Investigation proved that the own had eaten a ptarmigan. We also saw lots of goat and sheet scat on the way to the summit. Poignantly, at the top we saw a bald eagle soaring overhead. 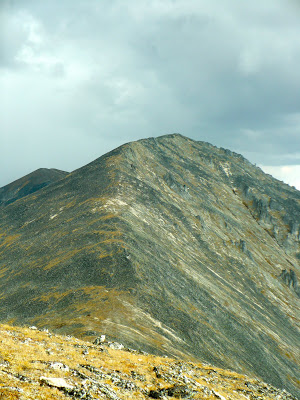 [Small sheep trail is visible along the spine of Mount Prindle, which we summited at 5,286 feet.]
Coming down, as always, went quickly, and by late afternoon (Time? Who knew by that point?) we were back at our base camp with 5 miles and countless high peak views under our belts.
[More pics and video when I get them from KB…]
Comments