Readers of this blog know that the first thing I do when I arrive at a new location is study my copy of Home Ground: Language for an American Landscape, edited by Oregon’s own Barry Lopez. It’s been two nights, and already I can feel the folk-loric pull of Wallowa Lake on my psyche. I woke at 4am this morning to moonlight shining on the rippled lake surface and could hear water lapping the shores. Immediately, I started composing a tongue-in-cheek lyric essay addressed to the Sea Cow of Wallowa Lake, wherein I persuade the creature from the depths and into the world to redeem its reputation and walk amongst the humans. Hah! 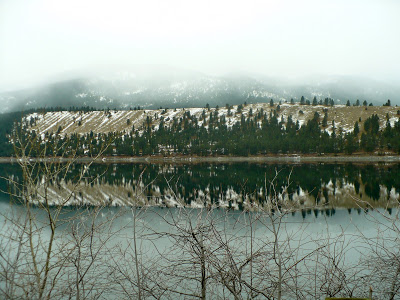 [View of west moraine reflected on Wallowa Lake in today’s cloudy, snowy light. The lake house I’m staying at is located about 2/3 of the way along the shore from left to right.]
Home Gound’s definition for “lake” is so interesting that I’d like to quote it in full for today’s post. It is written by Patricia Hampl.
lake
A lake is a considerable body of water surrounded by land; or, sometimes, an expanded part of a river (as Lake Pepin, the massive widening of the upper Mississippi River between Red Wing and Wabasha, Minnesota). Lake has traditionally denoted a body of water large enough to present itself as a geographic feature, perhaps opening to rivulets and streams, thus potentially part of a larger, interrelated water system. But lake has proved to be a wonderfully, or perhaps perversely, flexible term and is applied to freshwater forms as diverse as the Great Lakes, which constitute vast inland seas, and small constructed ornamental lakes in parks to even private properties.
Lake is also a red pigment composed of a coloring agent combined, usually by precipitation, with metallic oxide or earth to create striking hues such as madder lake (a fierce yellow).
The etymology of lake has been traced to early forms meaning play, fun, sport, glee, games, and tricks, and sometimes “to fight” and occasionally “to please.” In early Middle English, “to lake” indicated an offering, a sacrifice, finally a gift. These verb forms are very old, almost forgotten except in lexicons, but they provide testimony that argues persuasively that lake’s etymology is best found in the earliest traces of English out of its Teutonic roots, not, as might logically be assumed, from the Latin, lacus. Lake is unobtrusively onomatopoetic, the l and a together forming a plangent, serene sound, combined with the kick of the k, like the soft lapping of a wave. Lake often serves as a descriptive or evocative adjective, as in lake poets, lake country. Two particularly voracious fish, the bow-fin and the burbot, are sometimes called, in jest, lake lawyers.
In Minnesota, a regional usage—“We’re going up to the lake this weekend”—often confuses visitors who assume there is a single lake to which the speaker is referring, when in fact “the lake” pertains to any lake in the state but also, in the spirit of affectionate possessiveness, to a specific lake that is the speaker’s destination. Used in this way, lake is both a place and a condition, rather in the spirit of its earlier root in play and fun.