The Sea Cow of Wallowa Lake

Last night, winds howled down the slopes of Chief Joseph Mountain and sent rippling waves across the surface of Wallowa Lake. I woke to patches of clear sky, occasional fits of rain, and gusts strong enough to take the hat right off my head.

The central view from this lake house is breathtaking even on an overcast winter day. Over breakfast, it seemed as though I might just walk right off the edge of the second story house and splash into the chilly depths: 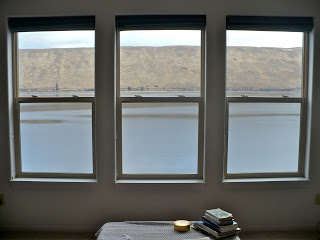 Wallowa Lake is 4 miles long and 1 mile wide, its deepest point measured at 283 feet. It’s also a perfect example of a terminal moraine, where a glacier receded many years ago. This lake house is on the West Moraine and the view above shows the East Moraine. Houses speckle the shorelines, with Wallowa Lodge and a handful of trailheads at the south end and Chief Joseph’s grave at the north.
In addition to views, this lake comes with its own unique history, not the least of which includes a little folklore. An article published on November 5, 1855 in the Wallowa County Chieftan sums up this lake’s primary legend:
A prospector, who refuses to give his name to the public, was coming down from the south end of the lake on last Friday evening in a skiff, shortly after dusk, when about midway of the lake he saw an animal about fifty yards to the right of the boat, rear its head and neck up out of the water ten or twelve feet, but on seeing him it immediately dived. He cased rowing and gazed around in astonishment for the strange apparition which he had just seen, when it raised about the same distance to the left, this time giving a low bellow something like that of a cow. It also brought its body to the surface, which the prospector avers was one hundred feet in length. The monster glided along in sight for several hundred yards. It was too dark to see the animal distinctly, but it seemed to have a large, flat head, something like that of a hippopotamus, and its neck which was about ten feet in length, was as large around as a man’s body.
Now this story may have been coined in the imagination of the narrator, but he was very earnest in his recital. However, it is a known fact that there is a tradition among the Indians that the lake has a big sea cow in it, which on one occasion, many years ago, came up one evening and swallowed a young warrior and his dusky bride as they were gliding over the surface of the lake in a canoe. And to this day an Indian of the tribes who formerly frequented its shores cannot be induced to go upon its waters.
The lake had been sounded to the depth of 270 feet, and it is a bare probability that some monster does inhabit its unexplored depths.
Sea cows or not, I won’t be swimming in Wallowa Lake anytime soon. The house sits at somewhere around 4,000 feet in elevation with the snow-capped Eagle Cap Wilderness high peaks range jutting up from the lake and into the clouds. Perhaps before I leave in April I’ll be brave enough to take a dip! 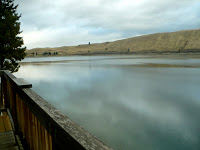 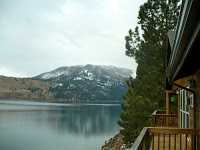 [Above: north and south views, respectively from porch. Below: 3 Google images from various angles] 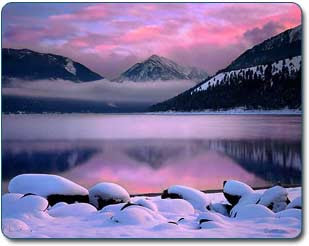