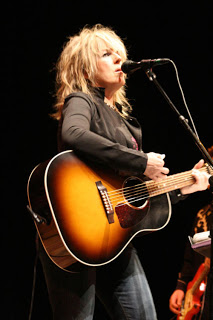 I have to say I felt a little more than ambivalent about seeing Lucinda Williams in concert this summer after I purchased her latest album, Blessed on iTunes. Where was the old jug band Lucinda? The hard knocks rocker? Where’d those narrative, piercing lyrics fly off to? But in the great debate between frugal reason and nostalgia, nostalgia won without a second thought and, thirty minutes after hearing tonight’s encore, I’m sure glad it did.
After all, more than a decade ago my housemate Thad played Car Wheels on a Gravel Road for me and songs like “Lake Charles” and “Drunken Angel” have remained part of my personal ongoing soundtrack to life ever since. An undergraduate philosophy major at the time, I’d hit the road to catch sunset over eastern Washington’s rolling wheat fields, crank Lucinda as aloud as my little Plymouth speakers could take, and smoke Marlboro Lights until I felt smarter. And somehow, after enough driving and enough Lucinda, something had shifted–not the kind of smarts that could be graded in the classrooms I’d spent all afternoon in, but surely the kind of smarts I needed to turn into the independent woman I’ve become.
After Thad showed me Car Wheels, I sought out Lucinda’s even earlier Ramblin’, which gave me my first taste of what I’d call persona vocals–and I mean that in a good way; Lucinda can channel those jug band old timey down on the bayou tunes like nobody’s business and that’s probably exactly why Smithsonian Folkways produced her album as both contemporary offering and historical study. Her version of “Make Me a Pallet On Your Floor” was the song that gave me, a hobbyist closet folk singer, permission to sing loud and proud and like I had faith in something bigger than myself. Most of all, her channeling didn’t force me to say what I had faith in, it just let me find it through creative imitation, until one day, singing in the shower started to feel a little like religion and I mustered the courage to start singing in front of other people, too.
Get a good story going in a song and sing it in a voice that nobody else could sing and, well, in this writer’s opinion you’ve got a recipe for greatness on your hands. Of course, there needs to be emotion and it needs to do more than pass, it needs to persuade. So when Lucinda belts “The sun came up, it was another day. The sun went down, you were blown away,” I don’t need to hear anymore of the song to know she’s “the rock ‘n’ roll poet laureate of pain.” I can hear it in her voice and the way the melody brings the lyrics to life. And seeing her live tonight–finally, after 12 years of fanhood–I could see it on her face, too.
It’s no secret she’s foxy for a 57-year-old rock star and her cowgirl boots, subtle black button up, and jeans that made her legs look oh-so-skinny fit the bill. Perhaps my favorite part of her get up (other than her bedazzled guitar strap) was the unplanned part of her outfit–the extra flare in the calves of her jeans created by the cowgirl boots. At times, she looked like a lotta boot and a lotta hair, with a bunch of skinny in between. I’d take that as a compliment if I were her, and when you consider the fact that her electric guitar was platinum, the picture starts to complete itself.
But back to Blessed: it still isn’t my favorite album and, like a die-hard-Dylan fan who hopes he’ll play “It Ain’t Me Babe,” I’ll probably feel that way for a long time. The important thing I learned about hearing her perform songs from Blessed live, however, is that the recorded songs I felt were very understated had a wholly different feel live and in concert. “Born to be Loved” and “Blessed” are prime examples, and “Copenhagen” presented itself–in live format, with the cool breeze from Green Lake blowing through the crowd at Kresge Auditorium–as a nearly perfect poem. Her guitarist, no doubt, gets a nod for that as well.
Thanks, Lucinda, for keepin’ it real and for showing this fan there’s still more to be discovered.
Showing 8 comments