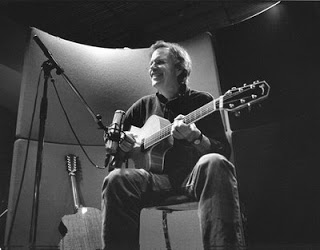 It’s easier just to listen at home, you might think about guitarist Leo Kottke. Or about any single-artist/single-instrument show. Why bother? A self-described depressive, Kottke himself might even have a hard time getting off the couch for a gig. It’s a guy and his guitar. So’s my neighbor. Same diff, right? Wrong.
Whether it’s a one-man-band or the latest super group, those of us who go to live shows don’t just to go hear the music. We go to feel it—the way the chords reverb between the stage and your rib cage, how your throat sort of wobbles in place during the low notes. We go to see it—the way the stage lights inflame the mood; or how quickly the artist’s fingers move, how flawlessly. And we go, above all else, because of what we don’t hear on the albums—the anecdotes that aren’t recorded, the cover or tribute songs that only come out every decade or so, the rapport between an artist and the audience.
By these standards, Kottke’s latest show at Interlochen delivered. Wearing slate gray denim slacks and a long-sleeved black top, Kottke walked onto the simple set at Corson Auditorium with no particular display of greatness. It’s a guy and his guitar, right? A cross-hatching of muted white stage lights set the background and four color lights backlit a single chair, the mic, and two guitar stands.
I could write about how amazing his polyphonic, alternative tuning, one-of-a-kind songs are. I could write about his Leonard Cohen/Johnny Cash hybrid baritone voice. Or his ingenious cover of “Corrina, Corrina.” But all that’s already been said. What I found most fascinating were those moments between songs when Kottke made the guitar an extension of his conversation with the audience.
Between songs, he told stories. And each story was made up of lines, each line made of sentences, each sentence made of words…and between those words, his fingers couldn’t seem to leave the guitar strings alone. “I had a 23-city tour,” he said “that was…[fingers pluck a few staccato chords, wiggle on the low E strings]…in Germany…[two spontaneous measures of harmonics]…” He carried on. And on and on. Perhaps even as many stories told, jokes included, as songs played. Words like “bungee” got a wah-wah-finger-pivoting pluck from the six string. “It makes you happy,” got a sporadic tap-tap-thumb-pluck-downstroke-picking action.
I’m not talking slapstick bah-dum-ching sound effects. What I’m talking about is watching Kottke tell stories on stage and seeing how his unconscious interaction with the guitar strings complimented his thought process. In some cases, he couldn’t find the right word but his fingers found notes, then it seemed as though his brain could latch on to something and he’d finish his sentence. In other cases, the right words came and the guitar was there as a back-up singer, so to speak, complimenting the words. In the end, it made for not only a fine performance musically, but a fascinating performance in terms of creative process. That’s to say nothing of his endless, honest, dark sense of humor…which left Interlochen’s audience cheering for an encore.
Showing 6 comments