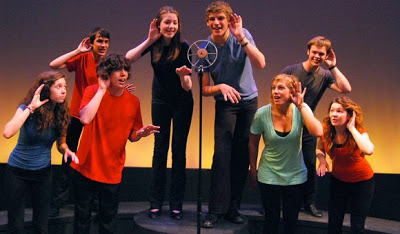 It’s just another day at Interlochen when there’s a Tom Hanks sighting on campus and the lead singer of Metallica’s daughter is one of your students. I have to admit, even as a teacher striving to see each teen as his/her independent self (separate from their parents, separate from pressures, separate from other people’s dreams), I still get a little tingly when I encounter these fun facts of life as faculty at one of the most acclaimed art schools in the world.
The last two days of each three-week camp session are filled with performances and celebrations, and as a teacher of Intermediate Creative Writing majors, I make a point to take my students to see work by others. We go to the high school creative writing reading, theatre ensemble, and musical theatre. Of these three, the latter is my personal favorite. There’s something absolutely alluring about seeing adolescents singing and dancing their hearts out up on stage, fully engaged, totally in their element, aiming to hit every note and dance step as if their lives depended on it.
And guess what? When you’re a teenager, your life does depend on it. It’s so true it’s become cliché: art saves lives. Interlochen is a testament to that. Other places I have lived and worked are too (such as Arthur Morgan School). But cliché or not, at the end of the day it’s performances like today’s musical theatre doing a contemporary hybrid of Hanzel & Gretel (that included “Rainbow Connection,” “Thriller,” and Willy Wonka’s “World of Pure Imagination”—yes, these kids and instructors are that innovative) that make it hard to believe anything otherwise. 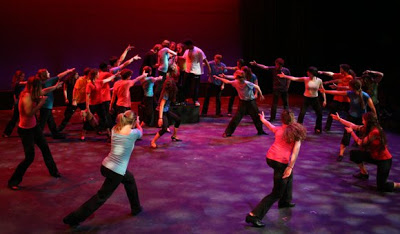 I’ve always believed in teenagers. Next to writing, it’s what I’ve given the most to in my life. If only the naysayers of today’s youth could see a place like this, the way the student’s faces shine with hope, they way their imaginations startle and impress, the way their laughter is so free you can almost taste it, the sweet, sweet flavor of belief in our future.