Collaboration at THE WAREHOUSE SESSIONS

0
0
Ok, so let’s talk about this–the collaboration. I’ve been playing around with flash fictions on minor urban catastrophes in fits and starts. Last spring I wrote 17 of them. During THE WAREHOUSE SESSIONS I’m setting out to write around 20 more. The hardest thing about this work is that it feels, at times, meaningless. Compared to Flashes of War, dealing with the character whose latte is made incorrectly or the gangster wannabe who’s buddy ditches him on the school bus somehow doesn’t move my soul in the same way.
That said, I embarked on this subject matter in April for a very specific reason: I needed a break from the war stories, I needed a break from 1st person narration, and I needed a setting completely different than one I’d ever written about in fiction before. In my mind, that led very naturally to the minor urban catastrophes; mundane moments in time that, however hopeless or petty or seemingly hollow, still yield some sort of truth about the human condition. Raymond Carver pulled this off story after story after story, especially in his first collection, Will You Please Be Quiet, Please? I’m not comparing my skinny drafts to his genius, but I will argue that a lot of his characters achieve a surface-level shallowness that, through Carver’s crafting, end up revealing something so deep it haunts readers for days. 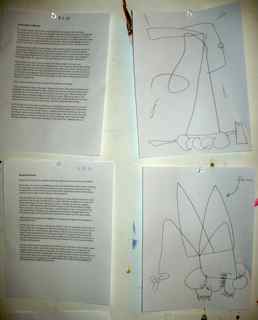 To me it’s still just playing around. Howard and I take turns choosing a title from the New York Times headlines. I give myself anywhere from 15 minutes to an hour, and pump out a 1-page single-spaced first draft that is very much like a freewrite. Then I press PRINT. That’s the hard part–I don’t print freewrites or early drafts, especially not when I know a flash piece is still growing into itself. But this is an exercise in generation, not perfection, and so I let the ink dry, then shimmy down the loft ladder to tack that day’s flash piece up on the wall. Howard scuffs over in his flip flops, holds his chin in one hand and the edge of the paper in the other, and reads. Sometime later, a drawing shows up. He’s utilizing the same mark making that builds his larger works of oil on canvas, but pairing them down and composing a piece that demonstrates balance and technique alongside individual voice. Don’t be fooled by the “simplicity.” Writers know one sentence contains multitudes. I’m learning that the same applies to a line.
Will this amount to anything? Will I write my way toward the importance of these characters? No one can say. But I do know that discipline and structure have never failed to teach me something and that when you add a collaborative element, the possibilities seem endless. If none of these flashes turn into complete, published pieces, I’ve no doubt I’ll still be a stronger writer on the other side of THE WAREHOUSE SESSIONS. Let the experimentation continue!
5 of 25 Ways of Looking at Houston: Here mixed-media sculptor Michael Crowder (the artist on the other side of our studio wall…there are dozens of them here in The Docks warehouses) opens his kiln at 1450 degrees to let glass cast butterflies cool at just the right juncture. The finished work looks like granules of sugar loosely gathered to form a perfect, crystaline butterfly, which he calls “Mariposa Mori.” His work will appear alongside 15 other artists next week at Diverse Works. 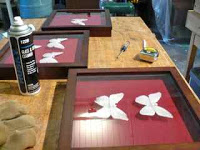 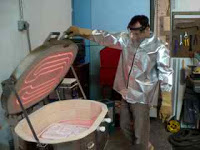